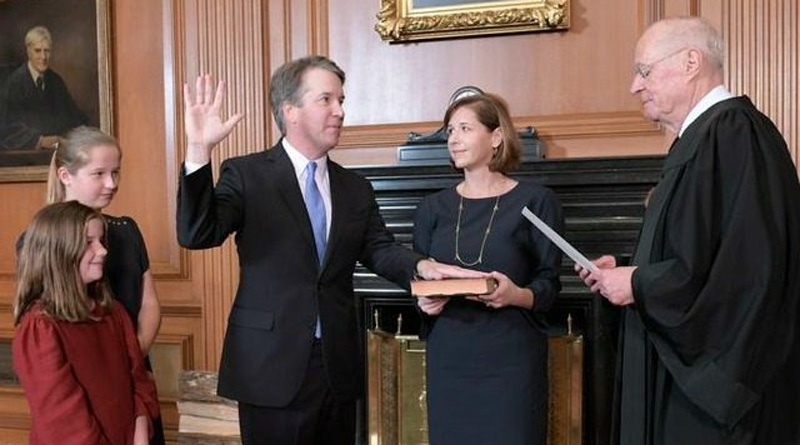 Brett Kavanaugh became the 114th justice to serve on the U.S. Supreme Court on Saturday, when the Senate confirmed him by a vote of 50-48, handing President Trump and Republicans a historic victory that shifts the balance of power on the Court.

The vote came in the middle of the afternoon on Saturday, less than 30 hours after the Senate invoked cloture late Friday morning to end an attempted filibuster by Senate Democrats and one Republican, Sen. Lisa Murkowski (R-AK). Senators invoked cloture by a vote of of 51-49, thanks to the “nuclear option” first engineered by Democrats under former Sen. Harry Reid (D-NV) in 2013, lowering the threshold from 60 to 51 for presidential nominations.

Sen. Steve Daines (R-MT) was in his home state during the final vote, walking his daughter down the aisle at her wedding. Daines was willing to take a private jet immediately back to Washington if necessary to cast the deciding vote, but Murkowski – the only Republican to oppose Kavanaugh – agreed to vote “Present” instead of “No” on the final vote, to neutralize the effect of Daines’ absence and keep the two-vote margin for Kavanaugh’s confirmation.

Saturday’s confirmation marks more than the dramatic conclusion to a political battle that has waged for more than three months, and instead could mark an inflection point in a philosophical war that has raged for decades.

The Supreme Court has not had a conservative majority since 1934, when the New Deal took hold and the Court moved to the left, giving the federal government vast new powers over economic issues. The Court massive broadened federal powers over commerce, taxing, and federal spending.

A conservative majority on the Court has been considered within striking distance since 1993, when two moderate justices were the swing votes on almost every issue that divided along philosophical lines. In 2006, conservative Justice Samuel Alito replaced one of those moderates, Justice Sandra Day O’Connor.

Since then, the Supreme Court has long been divided with four conservative justices to one degree or another, and four liberal justices on the other. The crucial fifth vote was the sole remaining moderate, Justice Anthony Kennedy.

When Kennedy announced on June 27 that he would retire during the summer, both political parties – and especially their respective bases – leapt into action with the most expensive, most brutal Supreme Court confirmation in American history. Both sides understood that issues of overwhelming importance both to conservatives and to liberals could be at stake.

On July 9, President Trump announced during a primetime address from the East Room of the White House that he was nominating Judge Kavanaugh, who has served on the U.S. Court of Appeals for the District of Columbia Circuit since 2006.

The political Left went into immediate meltdown, with raucous protests outside the U.S. Supreme Court. Alternate protest posters left on the ground included the names of the other three finalists as well, showing that liberals would have had a fit for any nominee President Trump might choose.

Experts from both sides dived deeply into Kavanaugh’s lengthy paper trail. He has authored an impressive 307 published opinions during his 12 years on the bench, totaling over 6,000 pages of judicial writing. When combined with the opinions he joined written by his colleagues, senators had over 11,000 pages of judicial decisions to examine in assessing Kavanaugh’s fitness for the High Court.

Beyond that, Kavanaugh submitted over 112 pages of answers to questions from senators, and included 17,000 pages of attachments. When combined with the records released from his public service over the past quarter-century, senators were flooded with a staggering 483,000 pages of material to review on Kavanaugh – more than the past five Supreme Court nominees combined – setting an all-time record.

Kavanaugh’s hearings before the Senate Judiciary Committee during the first week of September were heavy-hitting and constantly interrupted by protests, but he weathered the storm and appeared to be on a glide path to confirmation.

All that changed during the second half of September, when accusers brought forth sordid and salacious accusations of a sexual nature, which had never come up during Kavanaugh’s long service or the six FBI background investigations throughout his career.

A final curveball came in the form of Sen. Jeff Flake (R-AZ), who said he would require a final FBI background check into these allegations before voting for the judge on the Senate floor. Sens. Mitch McConnell (R-KY) and Chuck Grassley (R-IA) acquiesced, in light of their razor-thin margin in the Senate.

The FBI came back saying that they found no corroboration for the accusations. Flake and several other moderate senators then announced their support for Kavanaugh, including Sen. Susan Collins (R-ME) who gave an impassioned speech about the presumption of innocence and due process.

Collins’ speech highlighted how toxic judicial confirmation fights have been over the past couple years, deepening the divides in the nation. Experts worry that many of the most qualified candidates for high office – and especially the Supreme Court – will not answer the call to serve since it means lasting trauma for their families and reputations.

Regardless of all that, at age 53 Justice Kavanaugh now takes his seat as the newest associate justice on the Supreme Court, and is expected to serve for decades. Major cases already pending before the Court could reveal very quickly whether he is what conservatives have been waiting for these many years.

One thought on “Brett Kavanaugh Confirmed, Possibly Most Conservative Supreme Court Since 1934”