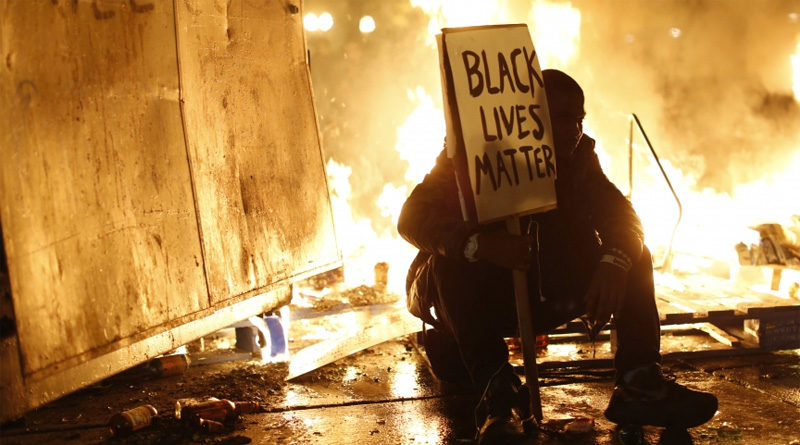 The Black Lives Matter campaign is a blood libel against white America. Let me explain what I mean by that.

A Blood Libel is currently defined by Wikipedia as

Blood libel or ritual murder libel (also blood accusation)[1][2] is an antisemitic canard[3][4][5] which accuses Jews of murdering Christian children in order to use their blood as part of religious rituals.[1][2][6] Historically, these claims—alongside those of well poisoning and host desecration—have been a major theme of the persecution of Jews in Europe.[4]
Wikipedia also says currently:
The term ‘blood libel’ has also been used in reference to any unpleasant or damaging false accusation, and as a result, it has acquired a broader metaphorical meaning. However, this usage of the term remains controversial, and Jewish groups object to it.[9][10][11]
Well, that’s what’s going on with Black Lives Matter. It’s one long blood libel. And it’s entirely made up.

These widely publicized deaths are usually the result of either a criminal attack by a black person on a police officer or an accidental death attributable to the arrested black person’s own bad health.

Eric Garner didn’t die of being choked—that was a lie. He died of weighing 350 pounds and straining himself by fighting police [The Actual Facts of The Eric Garner Case, by Ben Shapiro, Breitbart, December 3, 2014].

George Floyd didn’t die from having his neck knelt on—that was a lie, too. The police autopsy said that he died of a heart attack, and had drugs and traces of Covid-19 in his system, and he was complaining of breathing problems while still upright [Newly released body camera transcripts show last moments of George Floyd’s life—”You’re doing a lot of talking, man.” former officer Derek Chauvin said. by Ella Torres, ABC, July 9, 2020]. Police refused believe he couldn’t breathe because he could talk—if you’ve ever been choked in judo or jujitsu class you know that the instant you can’t breathe, you also can’t talk.

Freddie Gray didn’t die from a “rough ride” in Baltimore—that was a lie, as the failure to convict any of the police involved shows.

Michael Brown didn’t have his hands up when he was shot—that was a lie (told originally by his accomplice) as shown by the Grand Jury testimony from local (black) witnesses.

This blood libel, which David Cole calls The Myth That Burns Our Cities [TakiMag, July 7, 2020], has been sold to black America and younger, more liberal parts of white America, and is responsible for a lot of deaths. It hugely increases the black on black murder rate when police are knocked back, and rioters and Black Lives Matter gunmen kill a lot of people directly.

The basic unreported fact is the huge amount of crime committed by blacks, which it’s considered indecent to speak of in a newspaper.

Heather Mac Donald, writing in the Wall Street Journal, calls “systemic police racism” a myth, and she has, as usual, evidence to prove it:

Police shootings are not the reason that blacks die of homicide at eight times the rate of whites and Hispanics combined; criminal violence is.

The latest in a series of studies undercutting the claim of systemic police bias was published in August 2019 in the Proceedings of the National Academy of Sciences. The researchers found that the more frequently officers encounter violent suspects from any given racial group, the greater the chance that a member of that group will be fatally shot by a police officer. There is “no significant evidence of antiblack disparity in the likelihood of being fatally shot by police,” they concluded.

A 2015 Justice Department analysis of the Philadelphia Police Department found that white police officers were less likely than black or Hispanic officers to shoot unarmed black suspects. Research by Harvard economist Roland G. Fryer Jr. also found no evidence of racial discrimination in shootings. Any evidence to the contrary fails to take into account crime rates and civilian behavior before and during interactions with police.

The false narrative of systemic police bias resulted in targeted killings of officers during the Obama presidency. The pattern may be repeating itself. Officers are being assaulted and shot at while they try to arrest gun suspects or respond to the growing riots. Police precincts and courthouses have been destroyed with impunity, which will encourage more civilization-destroying violence. If the Ferguson effect of officers backing off law enforcement in minority neighborhoods is reborn as the Minneapolis effect, the thousands of law-abiding African Americans who depend on the police for basic safety will once again be the victims.

The Myth of Systemic Police Racism | Hold officers accountable who use excessive force. But there’s no evidence of widespread racial bias, by Heather Mac Donald, June 2, 2020

Sarah Palin was attacked by the ADL and various Jewish leaders for saying it was a “blood libel” when every MSM opinionator and Democratic party functionary accused her of inspiring a mass shooting in Tucson. (The shooter was an apolitical madman.)

The same people who had blamed Sarah Palin for the massacre at the Tucson Safeway and then taunted her for her “silence” were enraged when she responded.

The theory of Palin’s critics is that the concept of “blood libel” is unique to the Jewish experience, and must not be used by other groups, being reserved for this particular myth. (See U.S. Jewish Leaders Slam Sarah Palin’s Blood Libel Accusation, by Natasha Mozgovaya, Haaretz, January 12, 2011—a headline that suggests Palin had committed a blood libel, rather than being on the receiving end of one.)

Given that, it’s obviously evidence of double standards that two separate Jewish critics of Trump (Paul Krugman and Joshua Micah Marshall) did not scruple to accuse him of committing a “blood libel” against, respectively, Muslims and Mexicans—who are, despite both men’s wonkish references to crime rates, actually killing people:

The point is that both Marshall and Krugman seem to believe immigrant crime is a myth, in spite of the evidence, and that in pointing out immigrant crime—mostly by illegals, who by definition are all criminals, of course—Trump is maligning these people and setting the white majority against them.

In another story from Haaretz, the headline of which once again makes it look as if Palin was the one committing the libel, Palin was quoted as saying

“Blood libel obviously means being falsely accused of having blood on your hands. In this case, that’s exactly what was going on… Just two days before, an op-ed in The Wall Street Journal had that term in its title. And that term has been used for eons.”

Palin Defends Use of anti-Semitic Term ‘Blood Libel’ | ‘Blood libel obviously means being falsely accused of having blood on your hands. In this case, that’s exactly what was going on,’ Palin tells Fox News, Reuters, Haaretz, January 18, 2011

I repeat—it’s a BLOOD LIBEL.

And, while it’s true that blacks themselves may be, for the thousandth time, “hardest hit” by uncontrolled black violence, maybe politicians and pundits should give some thought to the intended victims of this Blood Libel and the resultant pogroms—white America.

James Fulford [Email him] has been a writer and editor for VDARE.com for almost 20 years.