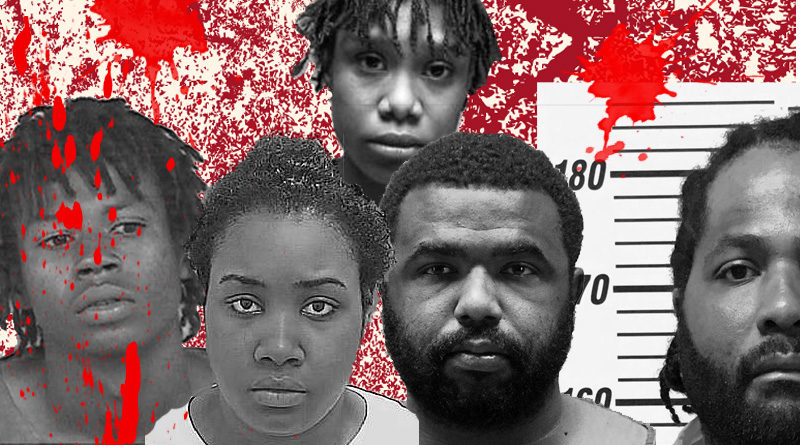 In 2018, a 25 year-old black woman in Louisiana named Felicia Marie-Nicole kidnapped a six month-old white baby and burned him to death. The infant’s body was found smoldering by some railroad tracks. She was arrested and charged with first degree murder.

Interestingly, this news story first appeared in Britain’s Daily Mail because it was intentionally “spiked” by our domestic sources of disinformation, otherwise known in these pages as “The Jews’ Media.”

In contrast to the frenzy that would accompany such an incident if the races were reversed, there has been nary a peep out of the Jews’ Media regarding this case. You see, interracial violent crime only serves the Jews’ Media’s purposes when the victim is black and the perpetrator is white.

If the Jews’ Media were to report black-on-white violent crime the way they sensationalize the far less frequent cases of white-on-black violent crime, we rubes in “flyover country” might get the wrong idea about Africanus Criminalis. That’s the 13% of the population that commits 90% of all murders in the U.S. each year.

In fact, the Southern Prevarication Lie Center (SPLC,) has even accused the CofCC of spreading what it calls “a false narrative of a victimized white majority under siege by allegedly violent people of color in the United States.”

Below are just a few of the violent black-on-white incidents that give Africanus Criminalis its well-deserved reputation, one that the Jews’ Media has been unable to successfully “spike” because of the evolution of a conservative and alternative news media, and one that includes the CofCC.

Tortured to Death: In 2017, an eight-month-old white baby named Reese Bowman was murdered at a daycare center in Baltimore, Maryland by a nigress. Police say Leah Walden, a 23-year-old black savage was captured on videotape intentionally murdering this white baby. She eventually pled guilty to first degree murder.

A police official described the videotaped incident as “torture,” and claimed that Walden can be seen swinging the baby by one arm, body-slamming her, and striking the baby. She also appeared to smother the baby with blankets and pillows, and is shown on the tape looking around furtively to ensure no witnesses observed her conduct.

Eight Murders: In 2017, a nigro in Mississippi engaged in one of those senseless mass murders for which the black race is so renowned. By murdering eight people in cold blood, Willie Corey Godbolt has been arrested for a rampage that began as a custody dispute with his ex-wife.

The murder victims include a Deputy Sheriff and two minors, and took place at three separate crime scenes across the state. The rampage ended only because Godbolt ran out of ammo. Upon his arrest, Godbolt stated that “I ain’t fit to live…not after what I done.” (Let’s hope the jury agrees.)

Unsafe Anywhere: In March of 2017, a 20-year-old white girl named Taylor Brandenburg was babysitting for a family in Dayton, Ohio when she heard a commotion in the front yard. After she stepped outside to investigate, she was shot to death by 38-year-old Chuckie Lee, a nigro with a long arrest record that includes serving four years on drug charges, in addition to assault charges, weapons violations, and more drug charges.

Predators: In October of 2018, a predatory black animal murdered a beautiful but naïve white girl named Lauren McCluskey, who was a Senior track star at the University of Utah. Her murderer was a black baboon named Melvin Rowland, whom she dated until discovering Rowland was a registered sex offender.

Like most members of the species Africanus Criminalis, Rowland lied to McCluskey about his name, his age his criminal history and no doubt, his lack of employment and source of income. In fact, it’s safe to assume the only thing he didn’t lie to her about was his race. The only redeeming thing about this tragedy is that when police closed in on him, the black bastard killed himself with the same weapon he used to kill Lauren McCluskey.

Knock-Out Game: In September of 2019, an unsuspecting 59 year-old white man named John Weed joined the body-count of innocent white victims murdered by sub-human, black rat-apes. He was the victim of two nigro “youths” who were entertaining themselves by engaging in the “Knockout Game” at a County Fair in Frederick, Maryland.

Five White Victims: In 2017, a 22-year-old nigro named Frederick Demond Scott murdered five middle-aged white men in the Kansas City area. He was charged Tuesday in two killings and named as a suspect in three more. His victims were white men between the ages of 54 and 67, most of whom were fatally shot from behind by this cowardly and sub-human example of a truly inferior species.

According to court records, in 2014 Scott threatened to shoot up a school and “kill all white people,” but was not arrested for terrorist threats because of black skin privilege. As if scripted by the Jews’ Media, police claimed they “did not know if the shootings were racially motivated.” One brilliant police spokeswoman stated she “saw no clear motive” for the killings.

Driving While White: In 2017, an unsupervised black four year-old ran into traffic and was slightly injured when struck by a vehicle. However, according to Cincinnati Police, the white driver of the vehicle — 44 year-old Jamie Urton — was ventilated and beaten to death by the niglet’s apelike father and his accomplice.

The niglet was treated at a hospital and then released. No such luck for the victim, who witnesses say begged for his life as his murderers pumped round after round into him and beat him unconscious.

Arrested were two black rat-apes named Deonte Baber – the shooter – and Jamall Killings, the appropriately-named father of the niglet.

More ‘Driving While White’: A naïve 24-year-old white male was savagely beaten to death on Detroit’s west side in 2019 after a minor fender-bender. The murder victim’s name was Tyler Wingate, a young man that friends and family say moved to Detroit because he loved diversity, and wanted to help return Detroit to its former glory.

Surveillance video from a nearby gas station showed the driver of the other vehicle approached Wingate after the incident and dropped him with an unexpected “sucker-punch.” As black savages will do, the assailant continued to furiously hit and kick Wingate until he no longer resisted. The murderer and his black accomplices then left the victim for dead.

Axed Dem Twice: In one of those incidents that gives Brooklyn its exotic reputation, a nigro who called himself “the Grim Creepa” on social media used an axe to murder and nearly decapitate a pregnant women, and then savagely chop up his former girlfriend.

Arrested was a 34 year-old nigro named Jerry Brown, whom police believe was known to both victims. The injuries to his former girlfriend were almost as appalling as those to the murder victim, including extensive slashes to the throat, neck, chest and head. The only silver-lining is that both victims were Hispanic rather than white.

Wheelchair Victims: In recent years, wheelchair-bound victims have been attacked and robbed in Chicago, Cleveland, Minneapolis, Philadelphia, New Orleans, Los Angeles and Saint Louis. In each case, witnesses described the suspects as black or dark-complected. Each of these cities has many individuals who fit such a description, which accounts for their high rates of violent crime.

Savage Instincts: In 2019, Emmanuel Deshawn Aranda went to the Mall of America in Minneapolis intending to kill someone. He settled on a five year-old white boy that he tossed over the third floor balcony to the first floor, below. Fortunately, the boy survived and is in reasonably good condition.

Aranda is a nigrito, a black ape with an Hispanic surname. This 24 year-old black savage has been charged with attempted first degree murder.

More Savagery: In 2017, a lovely 36 year-old woman named Carissa Oakman was murdered by a sub-human black gorilla in Detroit. She was found strangled to death with her wrists and ankles bound, and was disposed of in two black garbage bags. Her murderer was a big, black sub-human rat-ape named Antenidus M. Collier.

Savage at ANY Age: An 18-year-old Barnard College student named Tessa Majors was fatally stabbed near the school’s Manhattan campus on December 11th, 2019. The perpetrators were two savage black teens, whose initial attempts to rob her progressed to murder when she resisted.

The courageous young woman was stabbed multiple times in the stomach, face, neck and under an arm in or near Morningside Park. She managed to struggle back up a flight of steps to a security guard’s booth, only to collapse and die there. The guard found her after returning from his rounds.

While this naïve young woman had been a college student for only part of one semester, she learned the lesson of a lifetime when she came in contact with these two black teenage savages. Police contend Tessa Majors was planning to buy marijuana from the two black apes that murdered her.

Whether this is true or not, she hardly deserved to die at the hands of these vicious black savages. As nigros often do, they probably decided to “rip her off,” and keep both her money and the dope they had originally planned to sell her. This is a phenomenon that accounts for so many murders in our large, urban cesspools.

For decades, whites who opposed the forced integration of public schools, the workplace and residential neighborhoods were vilified by the Jews’ Media, leftist politicians, activist federal judges and other traitorous swamp-dwellers. These mostly law-abiding whites have been portrayed as backwards and “under-evolved” for their well-deserved skepticism over the consequences of forced racial integration by federal and state governments.

Yet, whites who opposed forced integration were often infinitely more familiar with the violent and predatory nature of Africanus Criminalis than any of their critics, most of whom have little or no contact with lower-class blacks in the normal course of a day. Race realists aren’t born with their attitudes, they learned them from extensive personal experience.

Fortunately, despite their betrayal by their own governments at the federal and state level, whites can still “vote with their feet,” so long as resources and geography permit. The white abandonment of our large, metropolitan areas is an example of this phenomenon, one that at least one demographer has called “the greatest mass-migration in human history.”

[A feature article in our upcoming “Black History Month” issue in the CITIZENS INFORMER.]