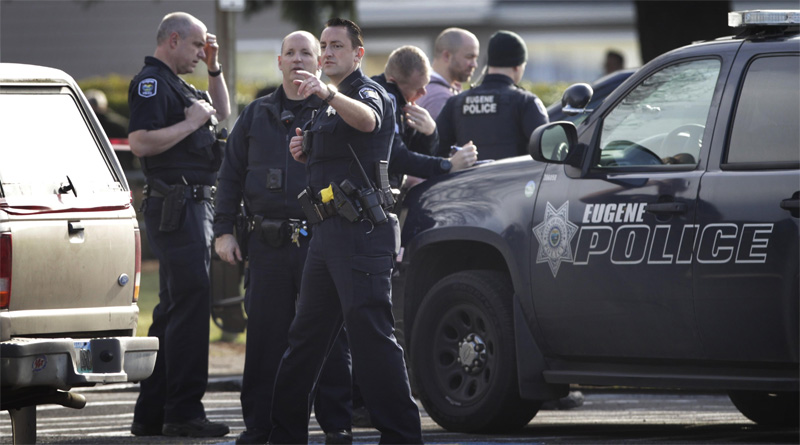 EUGENE, Ore. – As police attempted to place Charlie Landeros under arrest after removing him from Cascade Middle School amidst a child custody dispute January 11, Landeros pulled a 9mm handgun from a hoLster and pointed the weapon at Officer Steve Timm, investigators determined based on video evidence and witness statements.

As Johns called for help, Timm fired a shot that hit the pavement and went toward the parking lot, the investigation found.

“Officer Timm recognized that the situation was dangerous and needed to be controlled. Both were in fear of their own death or the death of other bystanders or students in the area,” District Attorney Patty Perlow wrote. “Officer Johns said he knew that if he let go of Landeros’ hand in the struggle, they were going to be killed. Officer Timm fired one bullet directly at Charles Landeros, striking Landeros in the temple, which was the cause of death.”

The officers were justified in using deadly force when they shot and killed Landeros, the DA said Thursday.

“The use of deadly force resulted in the death of Charles Landeros, the parent of a Cascade Middle School student,” Perlow wrote. “Based upon the investigation submitted by the Inter-Agency Deadly Force Investigative Team (IDFIT), including videos, witness interviews and evidence collected, I have determined that the involved officer’s use of deadly force was legally justified as self- defense and defense of others on January 11, 2019, at Cascade Middle School.”

Under Oregon law, the county IDFIT investigates the use of force by police and forwards the findings to the county DA for review.

“Detectives from Oregon State Police, including from the Salem office, Lane County Sheriff’s Office, Springfield Police, Cottage Grove Police, ATF and FBI participated in the investigation,” according to the DA.

Landeros enrolled a child at Cascade Middle School the week of the incident, the investigation found. The child started school there on Thursday, January 10, a day before the shooting.

Landeros did not provide any information to the school about the child’s mother, who shares custody and lives locally, according to the investigation.

The child’s mother went to the school on Friday, January 11, to see if the child was enrolled there.

The “mother had a copy of divorce and custody paperwork from 2013,” according to investigators. “School personnel called the school resource officer, who was en route, and then texted the officer that child’s father, Charles Landeros, had been called and was on his way as well.”

Investigators described what happened next:

Timm, the school resource officer for Cascade and other Bethel schools that share a campus, called for assistance.

Johns responded to the scene.

Officer Timm met with the mother and reviewed the court paperwork. He then, separately, advised Charles Landeros that the custody paperwork provided by mother indicated mother had shared custody and exclusive control over where child attends school. Charles Landeros confirmed that was the only court document regarding custody. The conversation was respectful between Officer Timm and Charles Landeros, though Officer Timm reported concern that there would be a problem if Landeros was present if the mother exercised her right to remove the child from the school.

When Charles Landeros indicated he would not answer any further questions, he was asked to leave the school. He was cooperating with exiting the office but remained in the hallway to express his view that the police did not have jurisdiction and only the principal could ask him to leave.
Officer Timm explained that he is the school resource officer and has authority to ask people to leave the property.

Landeros became more agitated and animated. Officer Johns began escorting Charles Landeros from the building and advised Landeros he would be arrested if he didn’t leave.

When Johns attempted to place Landeros under arrest, a struggle ensued. Timm tried to help Johns take Landeros into custody; that’s when Landeros pulled the gun, according to investigators.