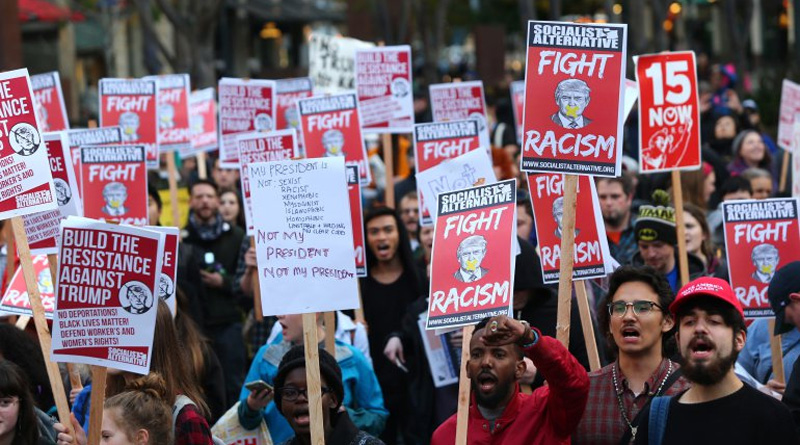 (Angry Patriot) – We live in a time where anti-white racism is being normalized. According to the Left, you cannot be racist to a white guy.

An ANTIFA anti-Trump protester forgot to toss his garbage in the trash can. The garbage was a pamphlet revealing a terrifying slogan, “The evil white race must be destroyed!” 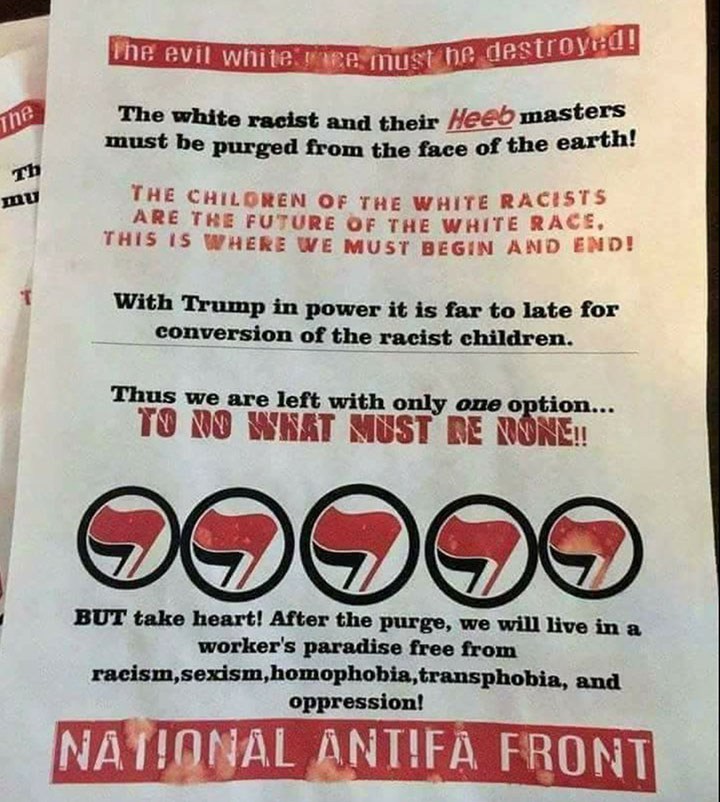 Well, there you have it, patriots. This is just the sort of culture we live in now. The white race is apparently evil, and we must be destroyed. I wonder what would happen if the shoe was on the other foot.

What if this terrorist organization had swapped out “white” for “black.” Do you think the mainstream media would cover the story? If that were the case, there would be riots in the streets.

This organization claims that Trump supporters are “neo-nazis.” Obviously, that is not true. Considering that term doesn’t work, they then resort to “white nationalist.”

Patriots, are you tired of being targeted for your skin color? I know I am. The Left has legions of beta males dealing with “white guilt.” Why would you ever support a movement that wants to exterminate you?

These people have been brainwashed by a corrupt education system and a biased mainstream media. It is just sad to watch young minds go to waste.

Fortunately, we have Donald Trump to expose the truth. Because of Donald Trump, these Leftist terrorists have exposed their true colors. They are a hateful organization of low lives.

The mainstream media refuses to cover the antics of ANTIFA, because it does not fit their narrative. They cannot comment on ANTIFA because it would undermine their message.

We need to push back against these actual racists. There is nothing wrong with being white. As a matter of fact, we should embrace it. The Left would say we have “white privilege.” There is no such thing as “white privilege.” Caucasians do not benefit from affirmative action. Caucasian men do not benefit from the Small Business Administration. There are policies put in place to help minorities, but none to help Caucasians.

I am sick of these liberal thugs trying to tell me I’m the problem. They would say that I don’t understand their experience. Well, I’m staring at a pamphlet saying, “The evil white race must be destroyed.” Maybe they don’t understand OUR experiences. Thankfully, we have Donald Trump to call out this nonsense.