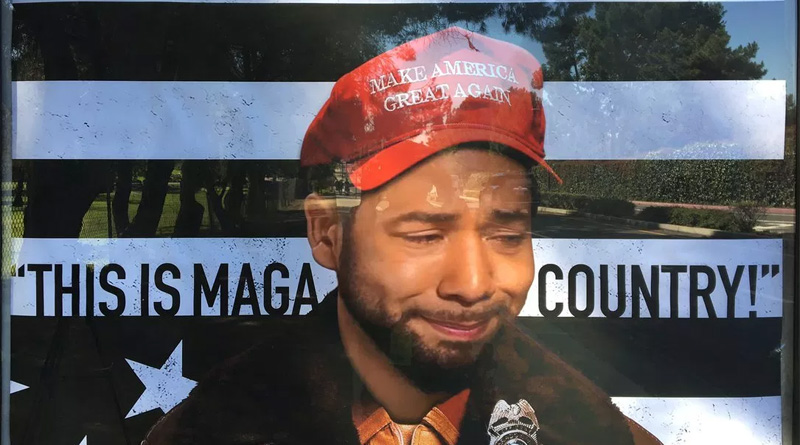 Unlike the Pharisees of the Jews’ Media, I refused to rush to judgement after the alleged assault on Jussie Smollett on January 29 of this year. I have a Ph.D. in Nigrology, so I knew better than to take Smollett’s allegations at face value because they sounded all too familiar.

On their face the allegations were absurd: Most Trump supporters would not be out at 2 a.m. on a Tuesday morning because most must get up and go to work; Likewise, most Trump supporters would not recognize Jussie Smollett even if he were standing next to them (I had never heard of him or his show); Finally, why in the world would two men be carrying around a noose and bottle of bleach in single-digit weather at 2 a.m. on a weeknight?

It now turns out that Smollett paid two black Nigerian friends to assist him in this phony “hate crime,” and the infamous “noose” that was found around Smollett’s neck was purchased by these Nigerians at a nearby hardware store. The Nigerians are now cooperating with police, causing the Chicago police to indicate that they had “shifted the trajectory of the investigation.”

There’s another consideration: When Inspector Harry Callahan was falsely accused of the self-inflicted injuries the serial killer “Scorpio” used to frame him in the film Dirty Harry, he responded that anyone could tell that he didn’t do it. When the San Francisco Police Chief asked him why that was true, Harry replied “Because he looks too damned good.”

Considering the big mouth on this lying, communist, negro and homosexual, if there had really been an altercation of some sort — with real Trump supporters — Smollett would not be in any kind of shape to be interviewed by every fake news outlet the Jews’ Media own.

This phony incident demonstrates several principles that will assist in understanding similar incidents when they occur in the future. First of all, most negros and most homos are pathological liars by the standards of any white heterosexual. For the negros, lying is practically in their DNA: They lie to their mommas, lie to their aunties, lie to their teachers, and eventually lie to their Juvenile Officers, the police and Probation Officers in order to avoid arrest and incarceration. Lying becomes as natural as stealing to most of them.

The same is true of most homosexuals, particularly those who are political leftists. Lying becomes a way of life for them because they must first hide their sexual orientation from their parents, then from their siblings, then their fellow students, and eventually, employers and friends. Their ability to simulate a totally false persona is why so many are employed as actors and entertainers, just as Smollett is.

Negros and queers are also mentally unbalanced, and will frequently fabricate alleged incidents of “hate” for the attention they can garner for being the target and “heroic” survivor of a hate crime. Smollett knew he would become an instant celebrity, and that it would revive what he presumed was his flagging career.

Negros and homos are two of the five basic constituencies of the “Democrat” Party, a group synonymous with lies and disinformation: The other three being communists, leftist Jews, and rabid feminists. Each will say or do anything to try to undermine or harm President Trump’s efforts to save this nation from the destructive path they and other communists have designed for it.

The Chicago Police have spent an enormous number of man-hours investigating this fraud – as if they didn’t have enough murders to investigate – because the alleged “victim” is a member of two “protected” species, both a negro and a homosexual.

Unfortunately, the City of Chicago is so corrupt, Smollett will not pay a significant price for his fraudulent allegations, false police report and criminal conspiracy. If Jussie Smollett is ever indicted – which I doubt – I predict he will receive a mere slap on his limp wrist for his misdeeds, such as probation or a small fine.

5 thoughts on “Another “Hate Crime” Hoax”