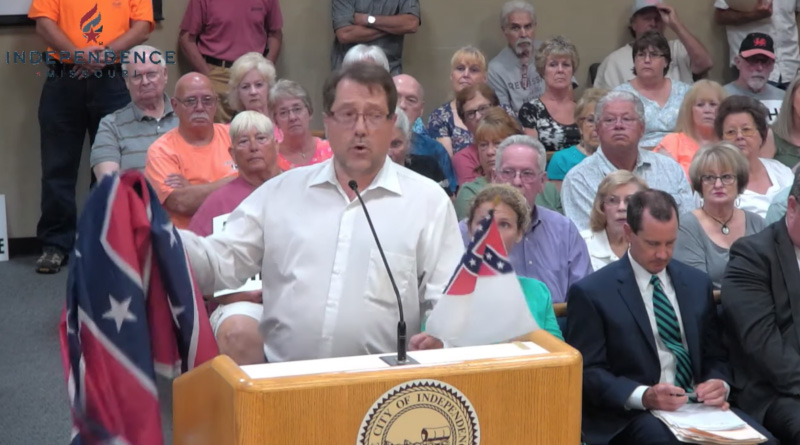 A part-time custodian for Independence, Mo., who was granted a request to speak regarding discrimination against employees during a city council meeting, used his time to criticize the display of the rainbow pride flag during Pride Month and claimed that he would be fired if he flew his Confederate flag.

Mark Velder, a part-time custodian for the city, made the controversial speech on Monday. Velder said that this is the fourth time he has spoken publicly about the issue.

KMBC reports that Independence’s mayor, Eileen Weir hung a pride flag outside her office to show support to the LGBTQ community.

“I feel very strongly that we have adopted nondiscrimination ordinances in our city, and I don’t want that to be just a hollow statement,” she said.

“We just did the Pledge of Allegiance, which says ‘I pledge allegiance to the flag.’ The flag. ‘The’ is a definitive article. That is my flag,” Velder said during his permitted three minutes, pointing to the American flag.

While Weir said that an employee has never been punished or asked to take down an office display, Velder claims men have been told to remove pictures of “a girl with a bikini” on their lunchboxes or toolboxes because “it was offensive.”

“Yet we’ve got a flag outside of the window, right up here that gives me a sense of discrimination. Something that’s not for equal rights, it’s a violation,” Velder continued. “That flag does not represent me, I keep hearing it’s for everybody. It does not. That represents people who have surgically removed part of their anatomy because they don’t know what kind of bathroom to go to … I’m normal. I’m normal.”

He added, “I’m asking can we get [the pride flag] down or just put mine [the Confederate flag] up. Just put this one up, I would love to see this one up tomorrow morning when I come to work.”

I believe in Independence for All https://t.co/9ULLB8GUrw