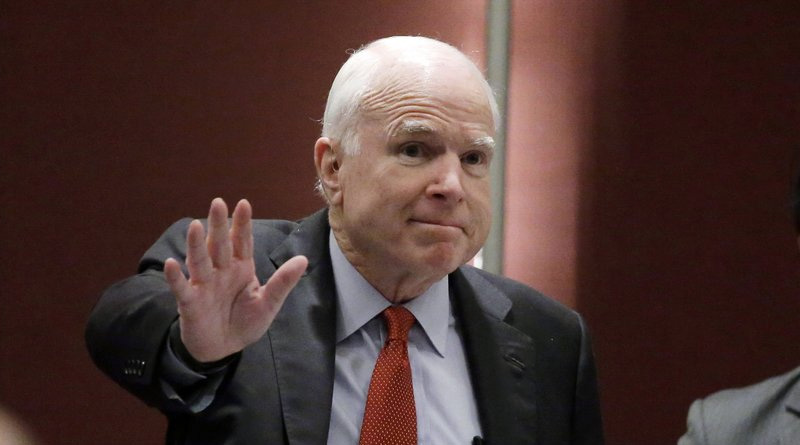 Out of respect, I didn’t intend to comment on the passing of John McCain: However, since his daughter and some of America’s most scurrilous traitors hijacked his memorial service to attack President Trump, I now feel relieved of any constraints.

In short, McCain was a mean, petty, and vindictive man, a fact that is readily apparent in his request that President Trump not attend his Memorial Service. Sarah Palin wasn’t welcome either, which put them both in good company, considering the traitors and hypocrites who WERE welcomed.

When John McCain was originally elected to the U.S. Senate from Arizona, his American Conservative Union (ACU) ratings were consistently around 90%, and sometimes in the mid-90s. These continued to slip, and eventually reached the mid-50s at one point. What happened?

I have speculated for years that “Democrats” possessed some kind of compromising materials on McCain, and used them to blackmail him into opposing conservative initiatives by his own party.

I was vindicated this summer when a “mislabeled” tape recording of McCain was discovered in the National Archives, in which he violates the U.S. Code of Military Conduct while a P.O.W. in Viet Nam. His effusive praise for his captors makes Jane Fonda sound like a piker! This may explain why he is not being interred in Arlington National Cemetery.

John McCain was that rare breed of fool that assumes our mortal enemies will treat him fairly in return for betraying his allies. McCain was dumb enough –- having graduated near the bottom of his class at Annapolis –- to try to ingratiate himself with the Jews’ Media by betraying his party, the Constitution, the voters of Arizona, and every conservative in the land.

The Jews Media probably abided by the terms of their bargain when he ran for President in 2008: However, media venom normally reserved for any Republican Presidential Candidate was merely re-targeted at his running mate, Sarah Palin. In private, McCain raged about his loss and blamed Palin for it, but she was probably the only reason he didn’t lose all 50 states.

There’s an anecdote from that 2008 campaign that defines McCain’s true character: He was campaigning in North Carolina a few weeks before the election and told his audience (paraphrase) to “vote for me because I’ll appoint conservative judges.” It should come as no surprise that McCain was one of the “Gang of 14” that rejected most of President George W. Bush’s more conservative judicial nominees.

Like those old “grand dames” of Washington, McCain was an arrogant narcissist who liked to receive attention and homage. It is no coincidence that he rose from his sick-bed to cast the deciding vote to save ObamaCare, probably the worst piece of legislation ever to become U.S. law. That’s the kind of drama on which he thrived.

McCain finished 894th out of 899 in the U.S. Naval Academy’s Class of 1952, yet, he received the “plum” assignment of Naval Aviation. Obviously, this was because both his grandfather and father were Four-Star Admirals at the time: Such plum assignments are rarely given to those at the bottom of the class: They are usually given to more deserving classmates at the top.

In his Senate Oath of Office, McCain swore to support and defend the Constitution, but his lack of judgement and ignorance of that document led to one of the greatest assaults on the First Amendment in its history.

McCain teamed up with a leftist Jew – Sen. Russ Feingold of Wisconsin – to co-sponsor the so-called Bipartisan Campaign Reform Act of 2002 (BCRA,) to restrict the capacity of Corporations to make political expenditures on behalf of candidates. Much of BCRA was overturned by the Supreme Court because spending money to support or oppose candidates or legislation is POLITICAL SPEECH protected by the Constitution.

In fact, it is exactly the kind of speech the Framers intended to protect by ratifying the First Amendment. Only a complete ignoramus would attempt to assist his mortal enemies and harm his own political party with unconstitutional legislation that restricts everyone’s political speech, but that was John McCain.

When Deep State conspirators sought someone to give their coup against President Trump some credibility, John McCain was an easy choice. McCain was given the fraudulent Steele Dossier and unwittingly participated in the coup by obligingly delivering it to FBI Director James Comey. Every conspirator knew that McCain’s vengeful nature, low I.Q. and gullibility made his participation a “slam dunk.”

Finally, McCain’s greatest betrayal probably occurred in the area ironically referred to as “immigration reform.” As a member of the “Gang of 8,” he helped write and co-sponsor a comprehensive immigration reform bill, glaringly mislabeled The Border Security, Economic Opportunity, and Immigration Modernization Act of 2013.

Had it been enacted, this legislation would have opened the southern border to an immigration Tsunami by the dregs of the Third World. As a member of the Gang of 8, he joined such fair-minded and “bi-partisan” Senate “Democrats” as Chuck Schumer, Dick Durbin and Bob Menendez in attempting to make a “Democrat” majority a permanent feature of the American political landscape using Third World voters and glaringly stupid “Republicans.”

McCain was not much better than most “Democrats,” and the U.S. Senate is a better place for his having left it. As far as I am concerned, Shakespeare anticipated McCain when he wrote of the Thane of Cawdor in MacBeth: “Nothing became him in life like the leaving it…”