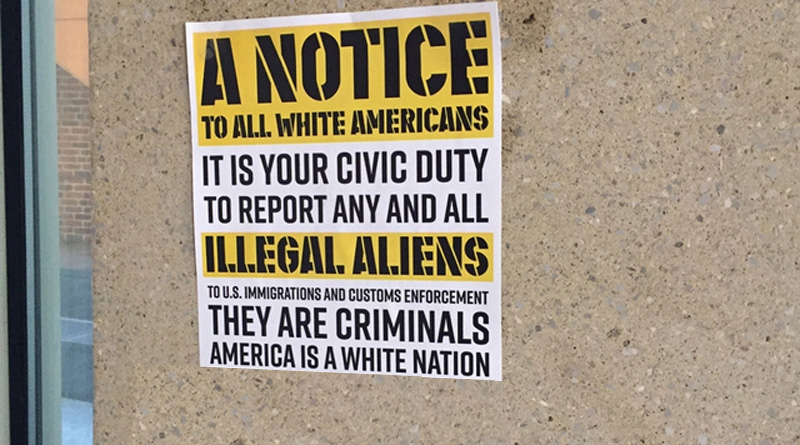 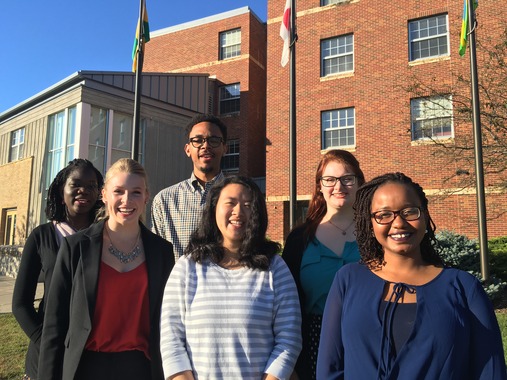 The “Diversity Leadership Council” at Gustavus Adolphus College has admitted to posting racially offensive posters around campus after the school’s Bias Response Team received multiple reports on the matter.

The signs, which are now being labeled a social experiment, notified “all white Americans” to report “any and all illegal aliens to U.S. Immigration and Customs Enforcement” because “they are criminals.”

Provocatively declaring that “America is a white nation,” the flyers assert that it is the “civic duty” of white Americans to turn illegal immigrants in to law enforcement.

Many Gustavus students and alumni reacted angrily to the white nationalist signage, with some inquiring “what the fuck” in disbelief, others calling it “disgusting,” and one succinctly stating “Fuck. That.”

One alumna even posted on Facebook that her cousin had discovered the signs at Beck Academic Hall and reported it to the school’s Bias Response Team, remarking that “it isn’t much of a surprise something like this was posted” at that particular building.

She then goes on to urge alumni to express their disgust with professors they know who have class in Beck, and even asks faculty members to “take five minutes from tomorrow’s lesson plan to talk about how fucked up this is with their students.”

But the following day, March 21, that same alumna took to Facebook again to explain that a friend of hers, who had also filed a complaint with the school’s Bias Response Team, had received a response from Dean of Students Jones VanHecke explaining that the offensive flyers were actually “part of a series of educational ‘invisible theater’ events taking place this week that have been planned by I Am We Are theater troupe, the Diversity Leadership Team, and the Bystander Intervention Committee.” 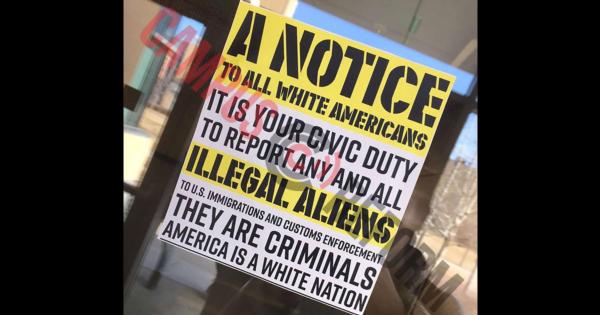 “I cannot thank you enough for the action that you have taken by filing a report and making sure that the incident was brought to the attention of the college,” VanHecke continued, saying that taking action “as a bystander demonstrates that Gustavus students care about each other and their collegiate environment and are willing to take a stand against hate and bias.”

In response to the outrage over the flyers, the Diversity Leadership Council published a statement the night the posters surfaced admitting that members of the organization had “posted these signs” in “an effort to help educate [their] peers and campus community about issues of bias, and the importance of being an active bystander.

“We want to help put an end to bias-related incidents that happened on our campus, social media, and in our communities by forcing individuals to have dialogues about forms of hate and bias,” the statement continues. “We hope that members of the campus community will reflect on today’s events and join us in ensuring that no one student or group of students are ever a victim of this form of discrimination.”

Many commenters, though, duly pointed out in response to the statement that the alleged social experiment likely caused more harm than good.

“Sometimes I walk around crowded theaters yelling ‘fire!’” one person commented sarcastically. “I do it because I want to create awareness; thus no punishment is warranted.”

“You hurt a lot of people, tarnished the college’s reputation, and will be losing alumni donations. I hope it was worth it,” one commenter remarked, while another noted that she found the tactic to be “wildly inappropriate,” saying that “as an alumni” she “won’t be donating anytime soon.”

Campus Reform reached out to the Diversity Leadership Council’s faculty advisor, Kenneth Reid, but did not receive a response in time for publication.