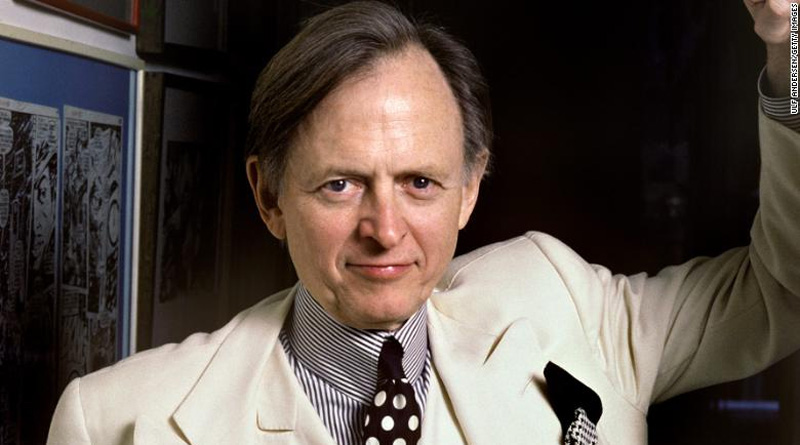 Tom Wolfe was a brilliantly insightful journalist and novelist, whose wildly colorful prose breathed life and humor into such varied subjects as the 1960s California drug scene, America’s first astronauts and race-hustlers of the left.

His use of novelistic techniques in his non-fiction helped establish what has been called “the New Journalism,” evident in such works as The Electric Kool-Aid Acid Test, The Right Stuff, and Bonfire of the Vanities.

For Wolfe, being an author “meant writing nonfiction, from newspaper stories to books, using basic reporting to gather the material but techniques ordinarily associated with fiction, such as scene-by-scene construction, to narrate it.”

He is credited with having coined the term “radical chic” to skewer wealthy leftists like Leonard Bernstein, who once hosted a cocktail party for Black Panthers in his Park Avenue apartment. He also originated the expression “the me decade,” used to illustrate the narcissism and self-indulgence of leftists who marred the 1960s and 1970s.

He is one of a very few authors to impress the late William F. Buckley, who once wrote of Wolfe in NATIONAL REVIEW: “He is probably the most skillful writer in America — I mean by that he can do more things with words than anyone else.”

While Wolfe rejected labels, Buckley correctly called him “a man of the right” because it was the pretentiousness and fraud of the left that were often his greatest sources of inspiration. As his NEW YORK TIMES obituary stated, he “found delight in lacerating the pretentiousness of others.”

The Electric Kool-Aid Acid Test recounts the hilarious but juvenile and irresponsible antics of Ken Kesey and his Merry Pranksters, as they devote their lives to frying their brains with staggering doses of LSD, marijuana and alcohol.

The Right Stuff won the National Book Award for its detailed narrative about the first American astronauts who participated in the Mercury Space Program at Edwards Air Force Base. Its most entertaining section was Wolfe’s description of the antics of these fearless former fighter pilots, whose nightly forays to Pancho’s Bar ended in wild and alcohol-fueled races home.

Wolfe’s The Bonfire of the Vanities was probably subject to more dishonest treatment than any book or film adaptation has ever experienced. It was intentionally mischaracterized as a critique of the 1980s “Decade of Greed” in order to fit the political narrative of communists, “Democrats” and other race-hustlers who envied President Reagan’s successes.

In fact, Bonfire of the Vanities was a scathing and satirical depiction of how thin the veneer of civilization truly is, despite the smug complacency of wealthy and insulated whites who are oblivious to the social and cultural revolution about to devour them.

It can truly be said of Thomas Kennerly Wolfe that the world would be a far less interesting and less colorful place had he not graced us with his wit and brilliance.