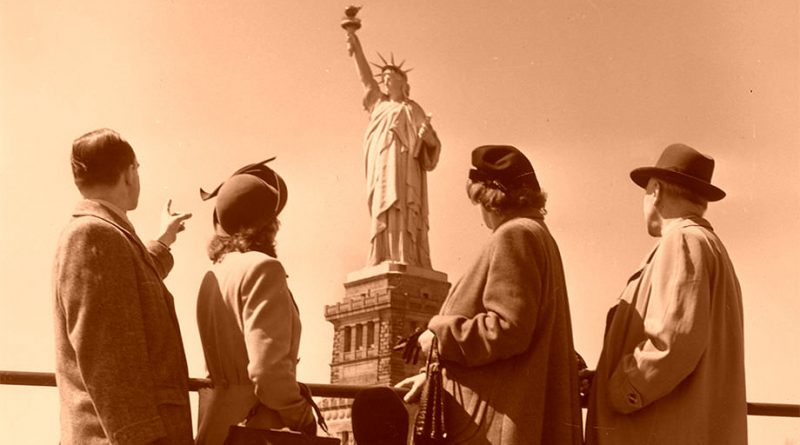 A nation of immigrants: This is a convenient myth developed as by the left to deny the roots of the country and brainwash Americans into thinking the United States was always multicultural.

Liberals keep saying the nation of the United States was founded by immigrants, but the country was founded by COLONISTS.. The colonists (English) who founded America are not immigrants. The founding colonists were quintessential Americans. They created the nation that Immigrants decided to come to…

Liberals just say things with no regard for historical fact… This is not a nation of immigrants. Going by a liberals definition of an immigrant ALL countries are nations of immigrants.

Immigration was NEVER intended to be a funnel for the sole purpose of diversity. The motto was never Multiculturalism, this term in itself is divisive and sets us apart as different cultures. The United States was founded on the principal of inclusion, we are all one (e pluribus unum), not “multi” and different. DIVERSITY. NO! UNITY. YES!

By 1776, British colonists—mostly English, but with strong Scottish, Welsh, and Irish contingents, along with New York’s Dutch colonials and later German arrivals—had created an American branch of British civilization. At the time of the Declaration of Independence, they were long-settled: almost 170 years in Virginia, over 150 in Massachusetts, not immigrants or even descendants of immigrants as we are told today.

Early Americans, the United States’ founders, were fairly homogeneous: 80 percent of British origin (60 percent English, 20 percent Scottish and Scots-Irish), most of the rest Dutch and German—the great majority American-born. Overwhelmingly Christian, 98 percent were Protestants. (Not included in these percentages are American Indians, who had no part in the political life of the colonies)

As for the Statue of Liberty, it is a gift from France to honor the centennial of American independence. Emma Lazarus’ “Give me your tired…”—a cri-de-coeur against Russian pogroms—is a later add-on. E pluribus unum explicitly commemorates the union of thirteen British colonies into one nation. The statue and the motto do not celebrate immigration; they salute the achievement of the settlers who founded those colonies and, in time, won independence from their Mother Country. It was the settlers’ nation, not empty wilderness, that later gave immigrants a new home.

A true nation of immigrants would be, absent a founding group or majority, it would be no nation at all, but a random gathering of people of assorted races, religions, and nationalities, united only by their presence in the same land. With no native culture to provide national unity, the population would tend to fragment on racial and ethnic lines, ensuring division and strife as groups pursue their interests at each other’s expense. It is not the American past.

Samuel Huntington makes a useful distinction between the settlers of a country and immigrants to it. It helps answer whether the United States is truly a nation of immigrants or an organic nation with an ethnic and cultural core: a nation of the settlers’ posterity augmented by immigrants and their posterity. In Huntington’s words:

“Immigrants are people who leave one country, one society, and move to another society. But there has to be a recipient society to which the immigrants move. In our case, the recipient society was created by the settlers who came here in the 17th and 18th centuries. … They came in groups to create new societies up and down the Atlantic seaboard. They weren’t immigrating to some existing society”

One demographic study concluded that, had there been no immigration after 1790, the settlers’ posterity alone—including African slaves’ and freemen’s descendants—would have grown by 1990 to approximately half the size of the actual population, which implies roughly half of Americans still have roots in the founding stock.

The federal structure the Founding Fathers erected for the United States is firmly grounded in their British heritage and American experience. No surprise: they were overwhelmingly of British descent, mostly English. Those who signed the Declaration and the Constitution knew of Locke and Enlightenment philosophes but knew their native law best: the English Common Law. Common Law remains the bedrock of every state’s law, with the unique exception of Louisiana. The rights of Englishmen were the animating spirit of the Bill of Rights, meant to secure them more effectively in America than they often were in England.

Acknowledging that America is a nation like others, with a native stock and traditions, does not deny the contributions of millions of immigrants and their descendants. Nor does it imply that Americans of immigrant descent are somehow lesser citizens. American success is the work of settler and immigrant alike. The propositional nation idea, that America’s British origins are immaterial to our national character, is also a half-truth.

Why, then, such pressure from the left to pretend that the United States is not really a country but an inhabited idea? One reason may be the attractiveness of the propositional nation idea to immigrant groups that do not want to feel second-class next to the natives. A benign motive but unnecessary: the United States accords no preference to settlers’ descendants.

America’s integrity is strained by multiculturalism, affirmative action, and mass immigration. The leftist creed is most convenient for those in government, ethnic pressure groups, and academia who want to cut America loose from her history and traditions to recast her as a multicultural mélange they can rule by distributing spoils to contending groups. In short, the creed has become a weapon for those who would dissolve America as it has evolved and replace it with something else. Those who would conserve this country need to know enough history to refute it.

Today many immigrants are too in-fact colonist but into an already existing society, they do not come here to integrate to the American way of life. This creates a clash of cultures, has always failed in history and is the root cause of many conflicts the world has endured. Liberals will condemn White Americans for colonization over the Native American people (IE: Indians), but yet go and promote the very same colonization against the American people themselves, specifically white Americans.

Past American immigrants were always eager to learn the ways of their adopted home, to integrate and assimilate. Modern day “Multiculturalism”, by contrast promotes they bring their culture with them and live under their own laws, we are divided and different, their loyalties lie elsewhere. This is what Multiculturalism brings, division NOT inclusion. It never end well, history shows us this always leads to conflict.