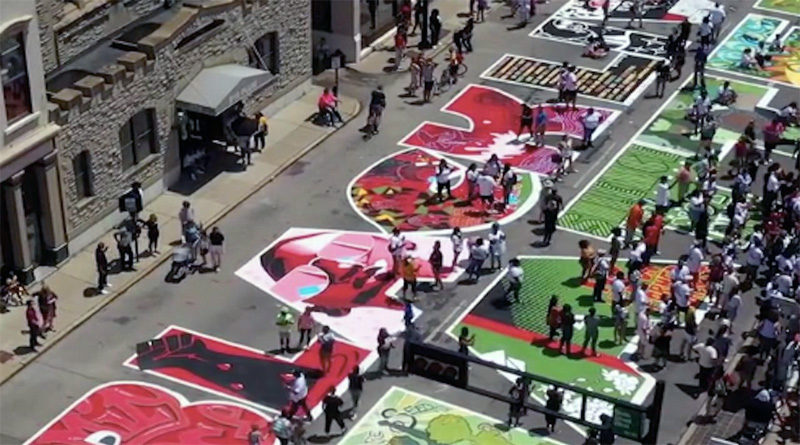 A distressing number of Black Lives Matter “murals” have sprouted up recently like so many mushrooms out of a mycelium of resentment and hate. That doesn’t necessarily mean shit to a toad, but the inclination of the press to refer to these eruptions respectfully as “murals” makes me wonder if they’ve ever seen a real mural. It also makes me wonder if black people will ever wake up to the fact that their minders, both black and white, treat them like mushrooms: keeping ‘em in the dark and feeding ‘em dung.

To begin, a mural is defined as “relating to, or resembling a wall; applied to and made integral with a wall or ceiling surface.” There’s no mention of streets in that definition, bro. What’s more, shouldn’t a “mural” have more than two colors, lest it be mistaken for a paint-by-numbers exercise for slow learners? Or a group therapy project writ too large?

Nevertheless, street painting has been elevated to the status of “murals” by a fawning and obsequious press, the same crowd that declared rap was poetry back in the day. That crowd doesn’t see the difference between Robert Browning’s “That’s my last duchess hanging on the wall” and Kanye West’s “I know she like chocolate men / She got more niggas off then Cochran.”

Persons whose bias prevents them from acknowledging the difference between real murals and BLM street “murals,” should consider these illustrations. One is a real mural, created by a person with an idea, working pretty much in solitude, a certain indication of white privilege. The other is something the mayor said it was OK to paint on the street and was willing, in at least one case, to assist the “artists” in painting … in the hope of preventing unauthorized shopping sprees, also known as QVC for looters.

So much for what motivates mayors; what about the press? For starters (and finishers), “Journalists’ brains show a lower-than-average level of executive functioning … which means they have a below-average ability to regulate their emotions, suppress biases, solve complex problems, switch between tasks, and show creative and flexible thinking.”

That last, from a study reported in Business Insider, explains why such notions as affirmative action, trigger warnings, busing, minority set asides, and other inanities keep flourishing and re-flourishing like mushrooms popping up out of the cow pies of popular culture.

I first encountered one of those deposits when I taught English in an all-black junior high school in 1965. I was part of a group of teachers asked to judge student essays, the best five of which would be featured in the main lobby’s trophy case. We were instructed to judge the essays for content, original thought, expression, and other non-quantifiables. Leave those red pens in the desk. Grammar, punctuation, and even spelling are irrelevant.

“Jump back,” I thought. “Are semiliterate kids part of the goals of the Great Society, too?”
That’s when I began referring to myself as the foreign language teacher. That’s also why I believe the bog-standard BLM “mural” isn’t worth a thousand words. It is even worth three.