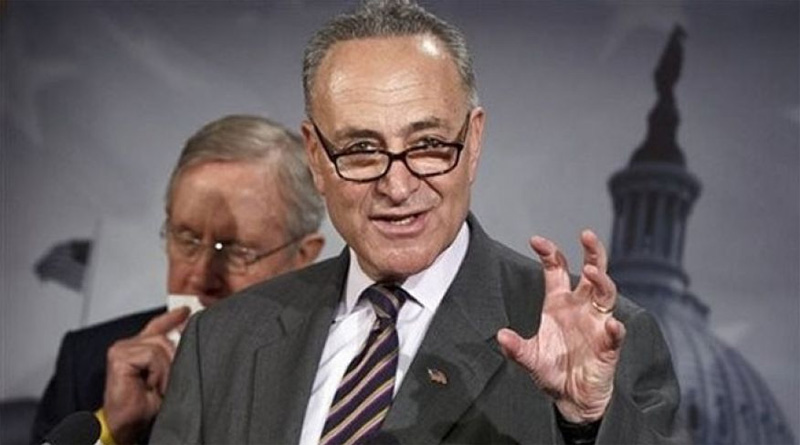 Senate Minority Leader Chuck Schumer voted against one of President Trump’s judicial nominees simply because he is a white male.

“The nomination of Marvin Quattlebaum [the judicial nominee] speaks to the overall lack of diversity in President Trump’s selections for the federal judiciary,” Schumer said on the Senate floor Wednesday. “Quattlebaum replaces not one, but two scuttled Obama nominees who were African-American.”

The Democratic leader lamented the fact that the majority of Trump’s nominees were white, and stated that he was casting his no vote to protest this lack of racial diversity. Regardless of Quattlebaum’s qualifications, Schumer thought he was unfit for the job due to his race.

That’s a stunning reason to vote against a nominee, which explains why the New York senator tried to deny that was the motivation for his vote in later interviews.

Unfortunately, his reasoning for denying someone a job is becoming common in America. Google was recently hit with a lawsuit alleging that the tech giant discriminates against whites and Asians in its hiring practices. According to the lawsuit filed by a former recruiter for Google, the company had “irrefutable policies, memorialized in writing and consistently implemented in practice, of systematically discriminating in favor job applicants who are Hispanic, African-American, or female, and against Caucasian and Asian men.” (RELATED: Google Slapped With Another Lawsuit Alleging Discrimination Against White And Asian Men)

This lawsuit follows another one filed by former Google programmer James Damore alleging Google discriminated against white male employees in the workplace.

Both Schumer and Google justify these actions by appealing to the all-magical quality of diversity. This ideal, according to its true believers, makes everyone better, smarter and more moral by its presence alone.

Universities have long clung to this mindset in order to uphold affirmative action in their admissions. “The mere presence of a diverse group — women, minority, men, majority — affects for the better how we act and what we say, even without our knowing the personal viewpoints or opinions of the other people present,” argued Lee Bollinger, the former University of Michigan president who served as the named defendant in the 2003 Supreme Court case that upheld affirmative action.

Diversity initiatives are typically presented in positive terms: they’re bringing more people into the fold and adding variety. Rarely is the focus put on the people who were denied jobs and college admission in the process — for obvious reasons. No one wants to hear about the negative effects of such initiatives.

But now the proponents of diversity are perfectly willing to admit they want fewer whites to be hired and go to prestigious universities. It’s all worth it to get that incredible diversity — besides, whites deserve to be put at a disadvantage for all those bad things that happened in the past.

Americans prefer to see our country as a meritocracy where the best person gets the job and success is dependent on skill, not color, gender or creed. Making jobs and college admissions dependent on race and/or gender strikes many people as un-American, which explains why nearly two-thirds of the country oppose affirmative action.

But the elites are still strong in their conviction that “positive discrimination” is needed now more than ever — they are not even bothering to couch in more appealing rhetoric. They’re pretty close to confessing the diversity they envision just means less white people.

In America, the advancement of this mindset means powerful corporations and politicians are fine with telling an applicant that they’re not qualified because of their skin color. In South Africa, it now means you can’t own any land because of your skin color.

Last week, South Africa’s parliament passed legislation that would confiscate white-owned land without compensation. The nation’s new president, Cyril Ramaphosa, endorsed the measure for its ability to atone for the “original sin” of whites taking land from the “indigenous people.”

Taking private property — the protection of which is a core principle of liberal democracy — away from one group solely because of their race is a dark omen for South Africa. Neighboring Zimbabwe already did this years ago, and it proved disastrous. Zimbabwe is now begging for the whites who were kicked off their land to come back and take over their old properties.

Even though the terrible consequences are abundantly clear to South Africa’s lawmakers, they’re dead set on this policy because they think it will make the country more equal. But all it will do is make the nation poorer.

Thankfully, America is nowhere close to this situation, but it should at least remind us of why it’s wrong to deny someone a job based on their race. Accepting this premise will justify far worse.

One thought on “No Senate Confirmation For White Men”