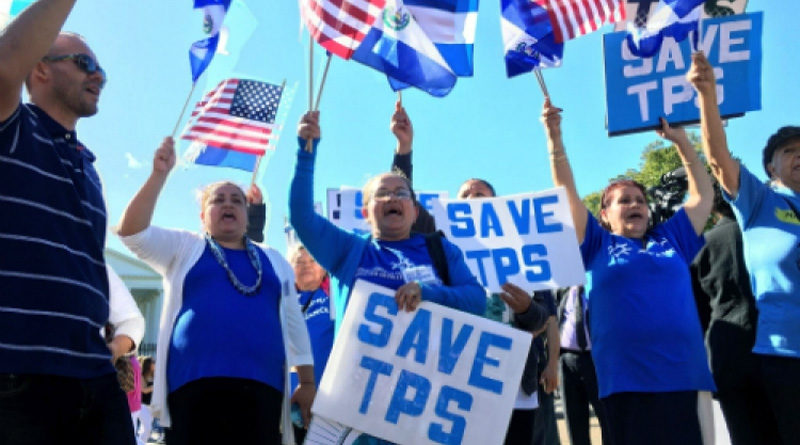 A three-judge panel for the 9th Circuit Court Appeals said it could not second guess the Trump administration’s efforts to end Temporary Protected Status (TPS) for roughly 300,000 immigrants from El Salvador, Haiti, Nicaragua and Sudan. Two Republican-appointed judges on the panel ruled that decisions by the U.S. Department of Homeland Security to wind down the TPS programs were not reviewable, setting aside a lower court order that had prevented officials from ending these protections.

The 2:1 decision on September 14 is an important win for Trump, but it will be appealed further by pro-migration groups and by business groups and cities that gain from the resident population of mostly lower-skill migrants.

For example, the Salvadoran migrants got their “Temporary Protected Status” (TPS) and work permits in 2001 from President George W. Bush — even though many of the migrants were illegals — when earthquakes deeply damaged their country. But Bush and President Barack Obama repeatedly renewed the status, even though El Salvador recovered from the earthquakes.

In 2017, Trump announced he would end the TPS status because El Salvador and the countries had recovered from their disaster, even though they remained poor.

“Despite overwhelming evidence that Trump’s TPS terminations were motivated by racism, this action will move forward and it now clears the way for the Trump Administration to de-document and tear apart 400,000 families,” said a statement from the National TPS Alliance. It continued:

In as little as six months … TPS holders would lose their lawful status and their U.S. citizen children could be forced to make an impossible choice between their families and their homes. Now more than ever it is imperative that Congress act to protect TPS families.

In 2018, a Californian district judge blocked Trump and ordered him to continue TPS for people from El Salvador and similar groups from Sudan, Haiti, and Nicaragua. He wrote:

TPS beneficiaries who have lived, worked, and raised families in the United States (many for more than a decade), will be subject to removal. Many have U.S.-born children; those may be faced with the Hobson’s choice of bringing their children with them (and tearing them away from the only country and community they have known) or splitting their families apart.

In the September 14 decision, two of the three judges on the panel slammed the lower-court district judge who had preserved the amnesty:

The panel held that the district court abused its discretion in issuing the preliminary injunction when it deemed Plaintiffs’ APA claim reviewable [by judges].

Second, the panel held that the district court abused its discretion in concluding that Plaintiffs presented at least serious questions on the merits of their Equal Protection claim.

the panel concluded that Plaintiffs failed to present even serious questions on the merits of their [racial] animus claim. The panel explained that, while the district court’s findings that President Trump expressed racial animus against “nonwhite, non-European” immigrants, and that the White House influenced the TPS termination decisions, were supported by record evidence, the district court cited no evidence linking the President’s animus to the TPS terminations.

Our sole responsibility as Article III judges is narrow—“to say what the law is.” Marbury v. Madison, 5 U.S. (1 Cranch) 137, 177 (1803) (emphasis added). And here, the most salient human components of this case do not answer that question. But the law does … I concur in the panel’s holding, which does not opine on the moral equities or the merits of President Trump’s political statements.

The third judge on the panel, Morgan Christen, said judges should be allowed to block Trump’s political choices:

The irreparable harm faced by plaintiffs—who include 300,000 non-citizens and 200,000 U.S. citizen children facing separation from their parents or their country—could hardly be more compelling. The district court also considered the public’s interest, including the integral role of TPS holders in national and local economies, the public’s interest in avoiding dividing families, and the harm to local communities. The court recognized that the government could not in good faith argue that it would suffer any concrete harm if TPS holders are allowed to remain in the United States pending resolution of this litigation because they have been lawfully present in the United States for many years.

The migrants are unlikely to be sent home in the next few months.

For example, Trump has negotiated deals with El Salvador to help U.S. border agencies quickly send migrants away from the U.S. border. Under current timelines, TPS status for the Salvadoreans is expected to end in 2022 if Trump wins the 2020 election.

Hidden in Biden’s immigration plan: A new pipeline of #H1B style visa-workers for use by local politicians, ie, to be traded to favored CEOs.
‘Libertarians’ will love it.
Does anyone think this cronyism would help non-elite Americans?https://t.co/CAuuFta8p7
— Neil Munro (@NeilMunroDC) September 11, 2020