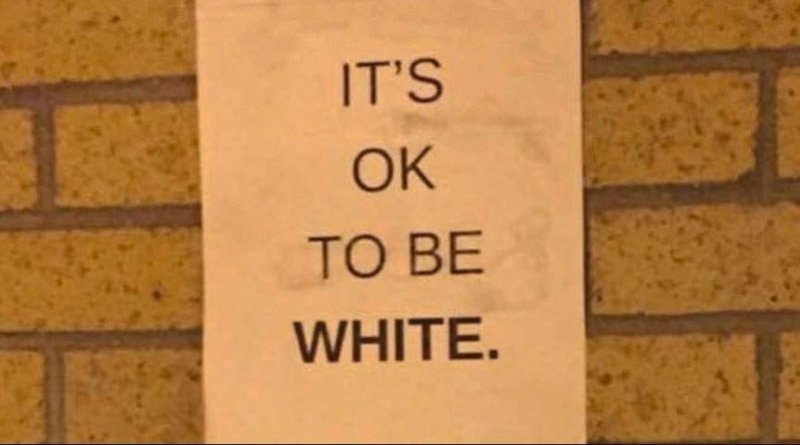 Campus officials typically removed the signs once they were discovered. The posters were condemned as “divisive” and “racist” by students and administrators alike. In several cases, the police were called.

The stunt was organized on 4chan’s “Politically Incorrect” board to show that “lefties & journalists hate white people.” Seeing “the media & lefties frothing at the mouth” in response to the signs would “nuke” their credibility, the author of the 4chan thread wrote, ensuring a “massive victory for the right in the culture war.”

The police were called to Cambridge Common and Harvard Square on Nov. 1 to investigate more than a dozen “It’s OK to be white” stickers posted on light poles and electrical boxes around the town, the Boston Globe reported. Workers from the Department of Public Works removed all of the signs with knives by morning.”

The plan as first outlined by a post on the 4Chan board, consisted of seven instructions to activists:

(* “Normies” is the often-used blogosphere word for “normal,” or non-politically aware people.)

The instructions contained a “proof of concept” link to a Youtube video from ABC 7 news, which, it said, showed that the tactic would work because a “harmless message like this has already caused a massive media sh*tstorm before.”

The video in question concerned a report of a poster featuring the American “Uncle Sam” character with the words “I want you to love who you are, don’t apologize for being white.”

The ABC 7 report said that this was a “disturbing discovery at Boston College” which was “white supremacist” and a “hate crime.”

“The point is to have the MAXIMUM CONTRAST between how evil the media portrays these posters, and how clearly benign they are to normies,” the instructions continued. Do not alter the poster: uniformity is key, it will have the biggest impact,” the 4Chan instructions added.

The plan worked exactly as predicted. As the Washington Post breathlessly reported, “‘It’s okay to be white’ signs and stickers appear on campuses and streets across the country.”

That newspaper said that “since Tuesday, the posters have been spotted in Rocky River, Ohio; at Concordia College in Moorhead, Minn.; at Tulane University in New Orleans; at Montgomery Blair High School in Silver Spring, Md.; around college-campus rich Cambridge, Mass., including the Harvard Yard and at the University of Alberta in Canada.

“In most cases, schools and cities have pulled the posters down, but the message has continued to spread in images and hashtags across Twitter and other social media platforms, even prompting a related Know Your Meme entry detailing its Internet origins and cultural backstory.

The fact that such an innocuous poster could provoke such an outcry is indeed evidence that the original organizers were absolutely correct in their strategy: just being white is a “hate crime” in the eyes of the media and the establishment.