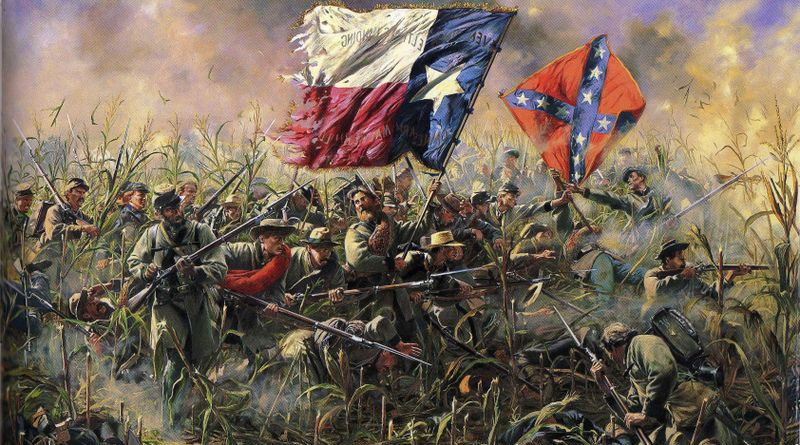 There’s something unique about Texans, a fact that was strikingly evident at the Alamo. Native Texans are a tough breed, and many of those with real “roots” in Texas are the offspring of survivors who fought invading Mexicans, Yankees, and bloodthirsty Indians.

Among the many famous anecdotes that illustrate both their courage and their fortitude is one from none other than General Robert E. Lee, in a quote attributed to him by Joseph Benjamin Polley, author of Hood’s Texas Brigade, published in 1910.

In 1861, a highly-regarded British Colonel — later Field Marshall and 1st Viscount — named Garnet Wolseley was dispatched to North America by the British War Office following an incident in which Yankees boarded a British ship and seized two Confederate diplomats. Colonel Wolseley’s mission was to evaluate Canada’s defenses in case Britain went to war with the Yankee Government over that incident.

After visiting Canada, Wolseley traveled to the South where he made the acquaintance of General Robert E. Lee and General Thomas “Stone- wall” Jackson. He wrote of his experiences in an article entitled “A Month’s Visit to the Confederate Headquarters,” which was published in Britain’s BLACKWOOD’S MAGAZINE in 1863.

One day, at General Lee’s invitation, Colonel Wolseley joined him in reviewing the Army of Northern Virginia as it marched from Sharpsburg, Maryland to the Rapidan River in Virginia. Colonel Wolseley indicated in his article that he was particularly impressed by Lee’s ability to identify each of his many commands by their home states.

As Hood’s First Texas Brigade passed by, the look on Wolseley’s face went from admiration to astonishment because the backs of their uniforms were badly tattered from months in the field. This condition was particularly true of the seats of their trousers, which were worn to such an extent that they left little to the imagination.

As he usually did, General Lee aptly summarized the situation with this now famous quote that put it all in proper perspective:

“Never mind their raggedness, Colonel: The enemy never sees the backs of my Texans.”