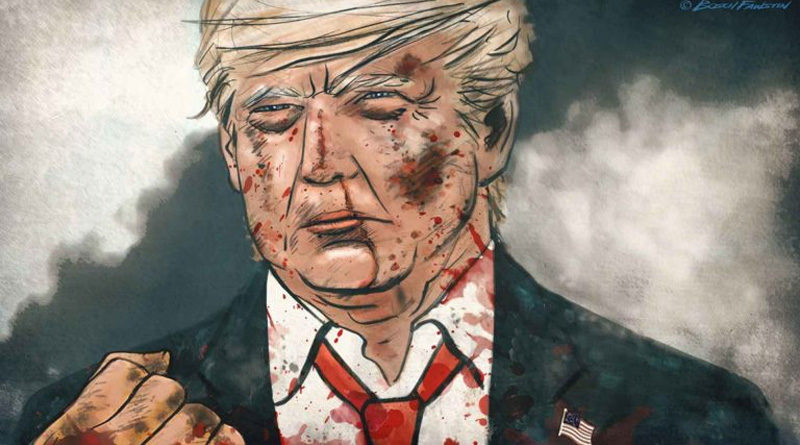 By now it should be obvious – even to conservatives – that we are in a war. It is a conflict that began nearly fifty years ago when the street revolutionaries of the Sixties joined the Democrat Party. Their immediate goal was to help the Communist enemy win the war in Vietnam, but they stayed to expand their influence in the Democrat Party and create the radical force that confronts us today. The war that today’s Democrats are engaged in reflects the values and methods of those radicals. It is a war against us – against individual freedom, against America’s constitutional order, and against the capitalist engine of our prosperity.

Democrat radicals know what they want and where they are going. As a result, they are tactically and organizationally years ahead of patriotic Americans who are only beginning to realize they are in a war. The Democrats’ plan to steal the 2020 election was hatched many years ago when Democrats launched their first attacks on Voter I.D.s, and then every effort to secure the integrity of the electoral system. Those attacks metastasized into an all-out assault on Election Day itself with early- and late-voting grace periods, and a flood of 92 million mail-in ballots, hundreds of thousands of which were delivered in the middle of the night to be counted behind the backs of Republican observers after Election Day had passed.

The result of these efforts is that Election Day no longer really exists as a day when the votes are cast and counted. This is a fact that offers generous opportunities for the election saboteurs to do their work. Those saboteurs’ opportunities were greatly enhanced this year with the installation in battle ground states of voting machines specifically designed to calculate how many votes were required to steal an election and then to switch ballots already cast and deliver them to the chosen party. Mail-in ballots were indispensable to the realization of this plan.

I will not dwell at length on the years it took the Republican Party, and American patriots, to recognize what the Democrat Party had become or the threat it posed to our country as an enemy within. Suffice it to say that Republicans can still be heard referring to Democrats as “liberals” when it is obvious even to them that there is nothing liberal about their principles or methods. They are vindictive bigots who are actively destroying the First Amendment in our universities, on the Internet and in our once but no longer free press. Suffice it to note that while Democrats accuse Republicans including the President of being racists and traitors, the response of Republican leaders is this: “Oh, the Democrats are just playing politics.”

This is not “playing” people. It is war. They are trying to kill us politically, and we need to respond accordingly, to fight fire with fire. Today’s Democrat Party is a party of character assassins and racists. Republicans know this but are reluctant to say it. That is how a pathological liar and corrupt political whore like Joe Biden can accuse the choice of 73 million Americans of being a white supremacist and also murdering 220,000 corona virus patients. That’s why Biden and his gunslingers can do so with no consequences – without so much as a wrist slap – from “moderates” and independents, who know better. The Democrats’ ability to intimidate well-meaning Americans is that great.

Is this too blanket a condemnation? Where, then, is the Democrat who was outraged by the four-year Russia collusion hoax and the failed coup and impeachment attempts – all of which accused the president, without a shred of evidence, of treason? Where was the Democrat who dissented from the public lynching of an exemplary public servant, Justice Brett Kavanaugh, over an incident that never happened 37 years ago at a time when he was a high school kid? Where is the Democrat who has condemned the violent street criminals of Antifa and Black Lives Matter who got away with conducting the most destructive civic insurrection in American history, orchestrating mayhem and disrespect for the law that led to the murders of scores of people who happen to have been mainly black?

What follows is a basic vocabulary for understanding the political war that has engulfed us. When it is used by enough Americans who love their country, it will cancel the surreal universe that Democrats’ lies have imposed on us, and the war will be on its way to being won.
Democrats are not democrats; they are totalitarians. They have declared war on the First Amendment, the Second Amendment, the Electoral College,

the Senate, the Supreme Court, the election system, and the idea of civil order. They have called for the Republican President of the United States to be de-platformed and jailed. Their obvious goal is a one-party state that criminalizes dissent. To them, support for such basic necessities as borders and law enforcement are racist. If you oppose their efforts to legalize infanticide, they will condemn you as enemies of women, and if you make videos of their confessions to selling body parts of murdered infants, they will – like Kamala Harris – throw you in jail.

Progressives are not progressive; they are reactionaries. They are out to abolish liberal value systems and create a status hierarchy where race, gender, and sexual orientation define and confine you to an unalterable place in their new social order. If you are white or male or heterosexual or religious – Justice Kavanaugh was all four – you are guilty before the fact.

But if you are a member of a designated (but increasingly imaginary) “victim” group you are innocent even when the facts show you are guilty – like the reprehensible female who lied to Congress in a calculated attempt to destroy Kavanaugh’s life and career. If you are a member of a “victim” group you have an unlimited license to persecute others. Thus, the LGBTQ lobby is currently behind a nation-wide crusade to strip Christians of their First Amendment rights and criminalize their religion. They use their victim status to leverage their hate of people who don’t embrace their agendas, and deploy it to crush them – and only Republicans seem to care.

Identity politics is a pure form of racism, yet Trump is the only Republican I’m aware of who has had the political spine to call a Democrat a racist. Identity “wokism” is a totalitarian politics because it encompasses every aspect of life, down to the pronouns one is ordered to use. The progressive police state will leave no space free.
Racists and aspiring totalitarians are what Democrats have become. The only moral principle they are guided by is the old Bolshevik saw, “the ends justify the means.” They will say anything however false and condone anything, however criminal, which advances their goal of maximum power.

Since race is the principal weapon wielded by Democrats, this is most evident in their claim that there is “systemic racism” in America, which needs to be rooted out even if it means destroying the very foundations of law and order. When two Republican canvassers refused to certify the election result in Detroit – a city once the richest in America but now mainly black and poor thanks to fifty-nine years of misrule by Democrats – they were accused of “systemic racism.” This charge and the accompanying threats by the Democrat mob were so intimidating the two withdrew their objections. But if there was in fact election fraud in Detroit, to object to it is not by any stretch of the imagination “systemic racism.” To believe otherwise is to believe that black people, due to their skin color, are incapable of committing election fraud. How racist is that?

“Systemic racism” is an assertion made reflexively by Democrats that is never accompanied by evidence. For good reason. Systemic racism has been outlawed in America since the Civil Rights Act of 1964. If there were actual instances of systemic racism in 2020, there would be lawsuits – plenty of them. Even making the racist assumption, which the Identity Politics crowd does make, that all white people are white supremacists by dint of their skin color, there are tens of thousands of black lawyers, prosecutors, district attorneys, attorneys general, and elected officials who would be filing lawsuits over a practice that is illegal. You never hear of massive lawsuits over systemic racism, because “systemic racism” is a myth. The myth lives because it is an indispensable weapon wielded by Democrats to advance their anti-democratic agendas and quests for power.

But the only reason Democrats are able to do this so successfully – even going so far as to justify the arson, looting and general destruction in more than 600 American cities this summer – is because Republicans, and conservatives generally, are too cowardly to confront them. This war will continue until patriotic Americans summon the courage to call Democrats the racists, liars, character assassins and aspiring totalitarians that they actually are. And to do so in so many words. Blowback works.

David Horowitz is the author of The Enemy Within: How A Totalitarian Movement is Destroying America, which will be published by Regnery on April 6, 2021.