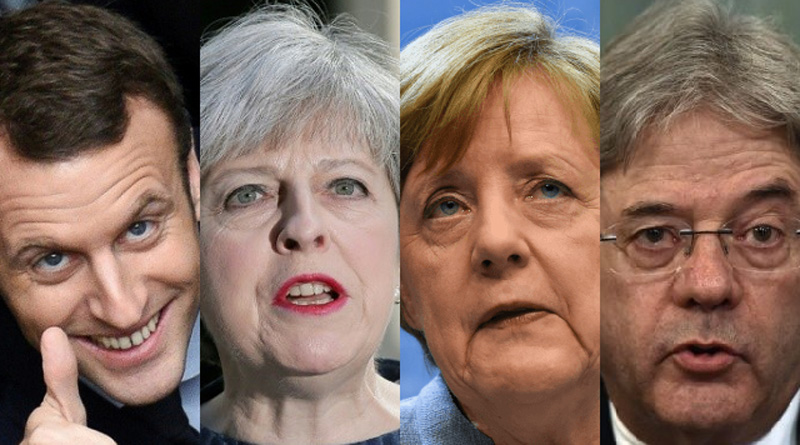 When France decided to slit its own throat last week and elect the childless Emmanuel Macron as its president over the bustier and more fecund Marine Le Pen, it made him the ninth current European leader whose loins have borne no fruit.

In addition to France, childless men and barren women currently rule Italy, Germany, the UK, Scotland, Sweden, the Netherlands, and Luxembourg. Jean-Claude Juncker, President of the European Commission, has likewise never fathered nor raised a seedlin’. (And it’s not as if he has a face that inspires female lubrication, so it’d be an uphill climb for him under any circumstances.)

At this point, the 39-year-old Macron will likely never become a father, seeing as his 64-year-old wife’s vagina stands a high statistical chance of having fossilized by now. Macron has described colonialism as a “crime against humanity,” although he apparently has no qualms about France being colonized by Muslims. He has also stated that there is no such thing as “French culture.” He is also persistently dogged by rumors that he’s had a long-lasting, rump-wrangling, man-on-man relationship with Radio France chief executive Mathieu Gallet.

“Emmanuel Macron is the ninth current European leader whose loins have borne no fruit.”

Days before Macron debated Le Pen on French TV, Le Pen’s father told a crowd, “He talks to us about the future, but he doesn’t have children!” The elder Le Pen described his own vision of France as “a past from where we come, and without which we would not have existed biologically, physically, morally, or spiritually.”

In other words, it’s a family that doesn’t really exist.

During the campaign, Marine Le Pen accused Macron of being the lapdog of Angela Merkel, the former communist and nude sunbather who has never given birth but has handed Europe over to be killed. Under Merkel’s frumpy rule, Germany can currently claim the dubious bragging right of being the nation with the highest quotient of childless women in the world. An estimated 30% of German women have spawned no offspring; among female college graduates, it’s 40%.

Current UK Prime Minister Theresa May also has a womb that might as well be a tomb, but at least it’s not from a lack of trying. Same goes for Scottish First Minister Nicola Sturgeon—she gave up after suffering a miscarriage.

Italian Prime Minister Paolo Gentiloni, who looks like Merkel with maybe a half-shot of testosterone and without the Grecian Formula, has likewise never used his genitals to generate a child. According to the latest results from a highly unscientific online poll, 100% of respondents think he’s gay.

Swedish Prime Minister Stefan Löfven has never seen a boy or girl call him “daddy.” The only thing mentioned in the “Personal life” section of his Wikipedia page is that he “enjoys sports.”

I cannot confirm whether or not Dutch Prime Minister Mark Rutte is gay or not, but look at this picture and tell me he isn’t. What I can confirm is that a woman has never carried his sperm to term.

The first is they are all leaders of nations/regions now suffering terrible Islamic extremism brought about by open-border immigration policies that they continue to support and demand be allowed.

The second is that none of them have children or grandchildren.

When it comes to Luxembourg’s Prime Minister Xavier Bettel (pictured at right with his partner), there’s no denying it—he’s as gay as a fresh sprig of mistletoe pinned to a red-velvet winter’s vest. He currently bears the distinction of being the “only openly gay world leader” at the moment. And we can all safely assume that his life partner isn’t going to start poppin’ babies out of his rectum anytime soon.

In stark contrast to the gaggle of unfruitful fruits who currently rule Western Europe, Donald Trump, Vladimir Putin, and Viktor Orban—who form a Triumvirate of Evil for anyone dumb enough to believe globalism’s a good thing—have graced the planet with a dozen children between them, which will undoubtedly lead to climate change and starvation in Africa, which will then force 100 million or so African refugees northward in search of freedom, social justice, and a better life.

Speaking of climate change and Africa, 24 out of the 25 nations on Earth with the highest birth rates all come from that vibrant and prosperous continent. I remember back in the 1970s when ZPG (Zero Population Growth) was a huge plank in the leftist platform—a plank that was slowly and silently withdrawn when people started realizing it would be “racist” to notice where all the population growth was occurring. So instead of trying to squash population growth in the areas where it actually needs squashing, the left has changed strategies and is cheering for demographic extinction in European nations where the indigenous population isn’t even breeding at replacement levels. That way, they can bring in all those prodigiously breeding, non-racist brown people and harmony will finally be achieved.

Under monarchy, it was assumed that a nation’s leaders descended from well-established bloodlines. Even in the Preamble to the US Constitution, it was understood that a nation that was something to be preserved for one’s “posterity.”

When I searched the word “posterity” on Google, the first definition to pop up was telling: “all future generations of people.” The idea that “posterity” meant “the descendants of a person” was described as “archaic.” Still, Merriam-Webster refuses to get with the program and still defines “posterity” as primarily meaning “the offspring of one progenitor to the furthest generation.” I highly suspect that this is the sort of “posterity” that the Founding Fathers intended. But under the Macronian definition, since there is no such thing as French culture, there is really no such thing as an ancestral French people who created it, so any Somalian or Algerian who seeks refuge in France is every bit as French as the linear descendants of Charles Martel.

The cobwebbed wombs and the blank-shooting scrotums that currently rule Europe obviously have no personal genetic stake in what happens to Europe after they die. To them, the Europeans of the future will be “all future generations” that inhabit Europe, not the biological descendants of those who’ve inhabited Europe for dozens of millennia.

A continent ruled by the sterile and inhabited by those who’ve been brainwashed or demoralized into choosing sterility themselves will have no posterity in the classical sense. Instead, they will be overrun by people from alien cultures who may not have developed much in the way of technology or philosophy but who at least possess the genetic wisdom to be fertile.

Let that sink in.