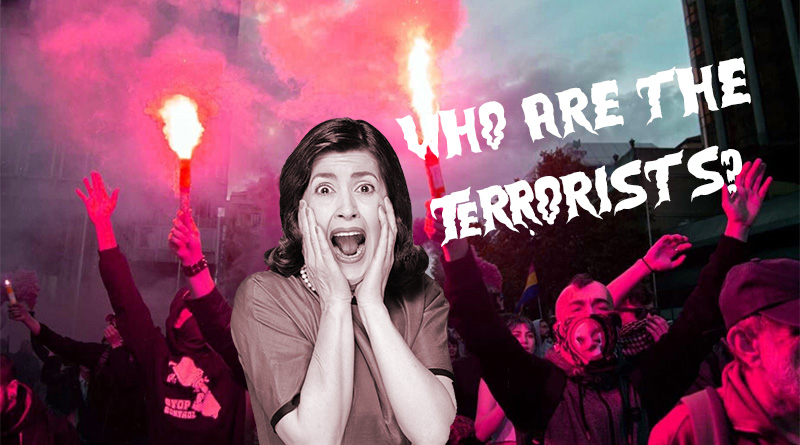 Lawmakers have condemned peaceful protesters and demanded the president do the same, yet they remain silent about leftist violence perpetrated by groups like Antifa and Black Lives Matter.

The Senate and House recently passed a joint resolution specifically condemning white nationalists and other so-called “hate groups”—including “neo-Nazis, the Ku Klux Klan and white supremacists”— and urged President Donald Trump to speak out against such groups and devote federal resources toward addressing the purported “threat” posed by them.

The resolution, S.J.Res. 49, was introduced by Sen. Mark Warner (D-Va.) with the support of Sens. Tim Kaine (D-Va.), Corey Gardner (R-Colo.) and others in the wake of the Unite the Right rally in Charlottesville, Va., a rally legally organized by leading members of the so-called alt-right that was sabotaged by a combination of state and local police, state of Virginia political officials, and a violent crowd of radical leftist counter-protesters.

The rally resulted in the death of Heather Heyer, a 32-year-old woman who was among the counter-protestors when she was struck by a vehicle driven into a crowd by a young man who was there to support the alt-right. The circumstances surrounding the car crash and Ms. Heyer’s death remain murky. Some allege that the driver of the vehicle, James Alex Fields Jr., was violently attacked in his vehicle by counter-protesters shortly before he drove into the crowd.

Fields allegedly has had a troubled history, having been accused in the past of assaulting his own mother on two occasions, and was reportedly on medication to help manage his outbursts of anger. The joint resolution, which was approved by the Senate on Sept. 11 and by the House on Sept. 12, condemns “the racist violence and domestic terrorist attack” that took place during the Unite the Right rally, while completely ignoring and dismissing the violence committed by counter-protesters that day. It also offers condolences and support to the Heyer family and families of the state police officers killed when their helicopter crashed as it left the Charlottesville area and specifically rejects “white nationalism, white supremacy, and neo-Nazism as hateful expressions of intolerance that are contradictory to the values that define the people of the United States.”

The resolution goes on to demand that President Donald Trump “speak out against hate groups that espouse racism, extremism, xenophobia, anti-Semitism and white supremacy” and to devote federal resources “to address the growing prevalence of those hate groups in the United States.” Days after the resolution was adopted, Trump signed and endorsed it, saying he rejected bigotry in all its forms. “No matter the color of our skin or our ethnic heritage, we all live under the same laws, we all salute the same great flag, and we are all made by the same almighty God,” Trump declared in a statement following his endorsement of the resolution.

Shortly after signing the joint resolution, during a conference call with a number of prominent Jewish groups, Trump condemned those who spread anti-Semitism. “We forcefully condemn those who seek to incite anti-Semitism or to spread any form of slander and hate—and I will ensure we protect Jewish communities, and all communities, that face threats to their safety,” Trump stated during the call.

The president has come under fire for not denouncing the alt-right rally and its organizers quickly or forcefully enough. Never mind that the rally was legally organized and represented an entirely legitimate expression of the First Amendment. The highly distorted controlled media narrative immediately disseminated during and after the rally portrayed the alt-right rally attendees as unhinged, violent white supremacists, neo-Nazis and Klansmen who were determined to violently confront the leftist counter-protesters who mobilized across the city of Charlottesville in response to the rally.

In reality, the vast majority of the violence was initiated and instigated by the radical leftist counter-protesters themselves, who threw urine and feces not only at alt-right demonstrators but also at media and police officers.

In light of the joint resolution and Trump’s endorsement of it, many Americans are left wondering when a similar resolution will be adopted and endorsed that specifically denounces and rejects the radical left, which has for decades engaged in blatant acts of violence, intimidation and terrorism. In recent years, various leftist groups—Black Lives Matter, Antifa, radical communists, anti-capitalists and anarchists—have become increasingly bold and violent, particularly since Trump stepped onto the political scene.

Black Lives Matter activists have burned down and looted entire neighborhoods, while Antifa and other radical leftists have attacked Trump supporters, damaged and destroyed private property, and otherwise engaged in violence and mayhem in a variety of cities across the United States. Efforts are already under way to demand Trump declare Antifa a terrorist organization. So far, though, Trump and other federal officials have not made any decisive moves to condemn and reject the radical left, which truly does pose a threat to the safety and security of Americans.