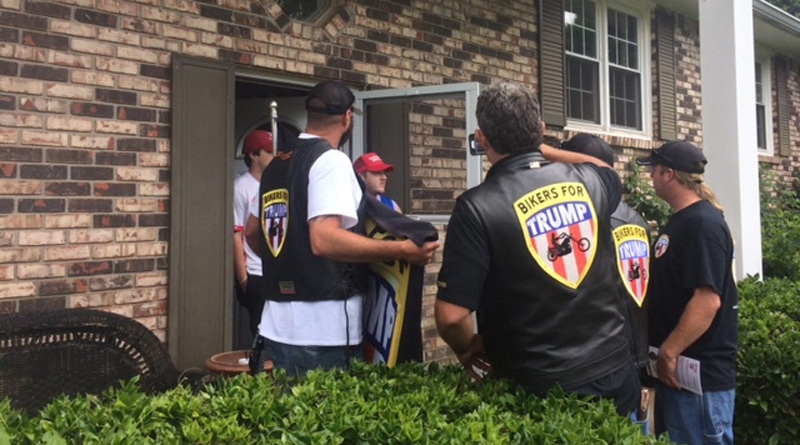 But then again, this isn’t your typical special election and this hasn’t been a typical year in politics.

The biker brigade was trying its hand at something new: getting involved on the ground in local congressional races.

“We’re here to put Karen Handel where she needs to be,” one of the bikers told a voter at his front door, “in D.C. supporting President Trump.”

Bikers for Trump formed in 2015 to back the then-Republican candidate whose campaign was viewed by many at the time as quixotic. Chris Cox, the group’s Charleston, S.C.-based leader, said Trump’s anti-establishment bent and pro-veteran, anti-Islamic terror rhetoric appealed to him and other bikers, so he started holding rallies with fellow enthusiasts across the country.

Since Trump’s inauguration, Cox said he noticed voters weren’t giving the president the respect he deserved. So he began channeling the energy of the group’s roughly 260,000 Facebook members into local races.

“Bikers for Trump is going to support any candidates, Senate, (House), local, that supports President Trump,” said Brian Strzalkowski, a power company lineman based in Winston who’s one of the group’s more than 700 members in Georgia. “Our goal is to see the state stay red and go all the way through and support President Trump.”

Handel’s bid to succeed Tom Price in Georgia’s 6th congressional District is seen as the first such effort.

“It wasn’t terribly hard for me to turn bikers out to the polls for the presidential elections,” Cox said. “So this is more of a political science experiment here, if I’m going to be able to rally the bikers behind Karen.”

So members of the group – some from as far as Florida – dropped in on a Handel campaign event Saturday at Williamson Bros. Bar-B-Q in Marietta. The contrast in style was striking: Handel, sporting boat shoes and a white collared shirt, shaking hands with the bikers, clad in leather vests with patches stating “all my ammo is dipped in pig’s blood.”

Handel’s relationship with Trump has changed over time. She often avoided discussing the president ahead of the first round of voting on April 18, but she’s since embraced him and Vice President Mike Pence, who fundraised for her in Cobb on Friday. Among Republican voters in the 6th, a majority said Trump has not been a factor for them as they’ve decided who to support in the congressional contest, according to a recent AJC poll.

After refueling with pork sandwiches smothered in the restaurant’s secret sauce, Veterans for Trump members split up to canvass the nearby neighborhoods along with volunteers from the Handel campaign. For most members of the group, it marked their first time knocking on doors for a candidate.

“This is not about Karen Handel. It’s about the Republican Party,” said Strzalkowski. “We support Karen Handel because she supports President Trump.”

As the group crisscrossed the neighborhood, curious onlookers snapped quick photos from behind the dashboards of their cars. One man tapped the brim of his “Make America Great Again” hat as he answered his door.

As the procession of motorcycles circled around and parked in the neighborhood’s cul-de-sac, one of the residents stepped into his driveway.