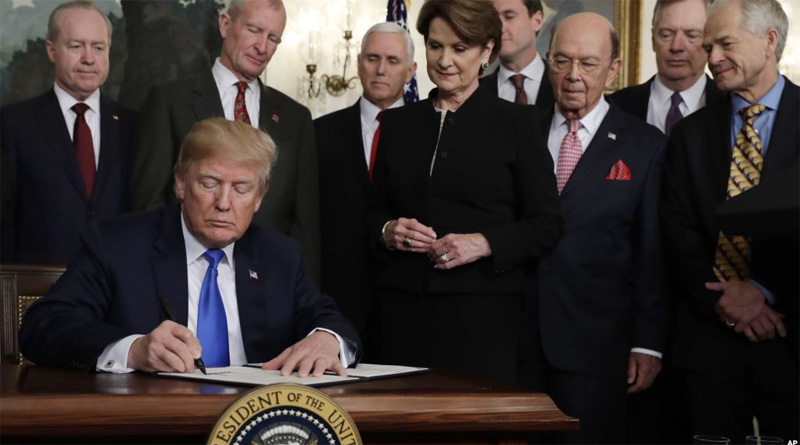 In understanding what the Corrupt Leftist Media calls President Trump’s “trade war” with a variety of foreign trading partners, it is necessary to understand that his tariffs are merely a TOOL that he is using to negotiate FREE AND FAIR TRADE.

Tariffs are merely taxes that are imposed on imported goods, and can serve several purposes: They can become a source of income to a nation, or they can be used to protect a nation’s domestic industries against competition from foreign imports. Neither of these is an objective of President Trump.

China is an even worse offender: It has consistently grown its economy at astonishing rates by using tariffs to discourage American imports: Meanwhile, it has occasionally “dumped” its excess steel and aluminum products in U.S. markets at less than cost. This has severely damaged our steel and aluminum industries, both of which are vital to the production of armaments and therefore, U.S. national security.

China has also stolen Trillions of dollars’ worth of U.S. technology over the past 20 years, by requiring U.S. companies operating in China to “share” or divulge their technological secrets with Chinese officials as a perquisite for doing business there. Chinese firms then use these trade secrets to compete against these same U.S. firms across the globe.

By imposing tariffs, Trump is attempting to penalize foreign nations that engage in unfair trade practices that harm us. However, his intent is not to generate income or protect U.S. industries, but rather, to force foreign nations to remove their OWN tariffs, and bring about free and fair trade between the U.S. and all trading partners. Tariffs are an essential tool to effectuate this outcome.

Because of the size of the U.S. economy, our trading partners need us a lot more than we need them. In particular, China has grown at such astonishing levels precisely because it has exported aggressively to the U.S., while obstructing and taxing U.S. imports. Tariffs on imported goods harm China a great deal more than they harm U.S. consumers.

President Trump is the first President in decades to have the courage to set about correcting an extremely disadvantageous arrangement that “globalist” traitors and the Deep State have used to weaken us and subvert us.