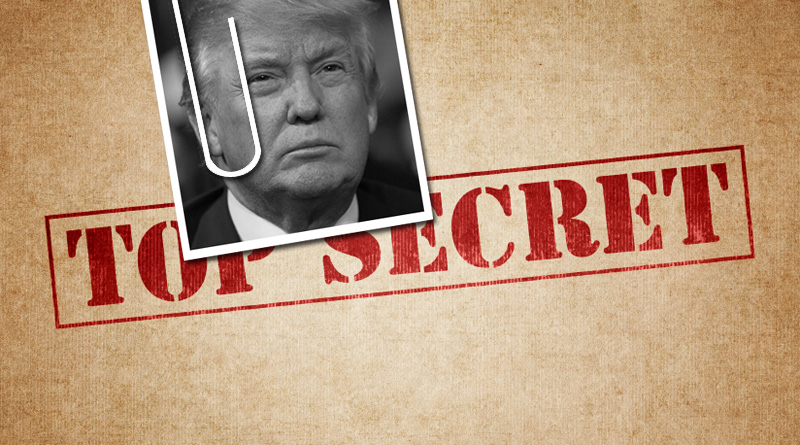 Hysteria following release of the Mueller Report – particularly the vicious and libelous assault on William Barr — is a diversionary tactic to protect Barack Obama and Hillary Clinton, who are both darlings of the Jews’ Media. The latter have always known that legitimate scrutiny of either would be a fatal blow to the misnamed “Democrat” Party.

It is now patently obvious that the only “collusion” with Russia by a 2016 presidential candidate was that engaged in by Hillary Clinton and her army of organized crime figures, including that Jewish swamp-rat at the Democrat National Committee (DNC,) Debbie Wasserman Schultz.

However, we know with certainty that the DNC and Clinton Campaign both engaged in collaboration with Russian intelligence agents. They paid $12 Million for the “Steele Dossier” — with money laundered through Fusion GPS and the Perkins-Coey Law Firm — in an attempt to camouflage the origins of the dossier and the DNC’s and Clinton’s role in funding it and distributing it.

Even the Pharisees at the NEW YORK TIMES now seem to recognize that the many falsehoods in the Steel Dossier — that routinely made their way into Corrupt Leftist Media’s “news reports” — probably originated with Russian intelligence agents, who were engaged in so-called “Active Measures” to disrupt U.S. elections.

By now, it should be clear even to idiots that all those discredited top-level Obama appointees were appointed specifically for characteristics that are now so much in evidence. These include such traits as their mediocrity, their loyalty to the “Democrat” Party, their leftist politics, their submissiveness, their hyper politicization, and their disloyalty to true democratic principles.

It is also why they were amenable to risking their reputations, careers and even freedom by engaging in unconstitutional and treasonous acts against President Trump and his campaign, that each was clearly aware had been approved by Hillary Clinton and Barack Obama.

#1 THE SYSTEM WORKED: Despite its prolonged and divisive nature, the system essentially worked. President Trump was demonstrably “exonerated,” and those Obama appointees whose misdeeds were camouflaged by the Special Counsel’s investigation will now be investigated by Attorney General William Barr.

The Mueller witch-hunt claimed a great many victims, but with the exception of Michael Cohen and Paul Manafort, most can be safely pardoned by President Trump for any minor misstatements that were pounced on by the Special Counsel’s team of “angry Democrats.” Each has every right to sue their tormentors who unlawfully persecuted them. These victims include George Papadopoulos, Carter Page, Michael Caputo, Jerome Corsi, General Michael Flynn, Rick Gates and Roger Stone.

#2 URANIUM ONE: The phony narrative that the Russians preferred the election of Donald Trump over Hillary Clinton was Jews’ Media disinformation, and never made any real-world sense. This is especially true since, as Secretary of State, Hillary Clinton willingly sold 20% of precious U.S. Uranium reserves to Russia in return for $145 Million in contributions to the Clinton Family Crime Foundation. To their delight, this taught the Russians that Hillary was not opposed to bribery.

In orchestrating her traitorous conspiracy, not only did Hillary Clinton demonstrate a willingness to engage in treasonous acts against the U.S. by arranging this so-called “Uranium One” deal, but in the process, she also made herself vulnerable to blackmail by Putin and the Russians because of the illegal nature of the deal.

It should be obvious that the Mueller investigation was a tactic used to divert public attention away from the endless misdeeds of the Obama Administration, and designed to put President Trump on the defensive. Its ultimate purpose was to obscure the crimes of many high-ranking Obama appointees who participated in the seemingly endless scandals that occurred under Obama. This is particularly true of those who felt pressured to “sign-off” on Hillary’s Uranium One deal, or jeopardize their professional aspirations.

The Committee on Foreign Investment in the U.S. (CFIUS,) consists of nine upper-echelon Executive Branch appointees, who are responsible for scrutinizing business deals involving the purchase of U.S. assets by foreign entities to ensure they are not contrary to our national security interests. During the Obama Administration, CFIUS was an obvious rubber-stamp for the criminal enterprises of Hillary Clinton, which is one reason why she was forced to use an illegal and unsecure e-mail server while serving as Secretary of State.

Many of those who engaged in the traitorous and unconstitutional coup against Donald Trump — as a candidate and later as President — were members of this very committee. In addition to Secretary of State Hillary Clinton, CFIUS was also attended by FBI Director Robert Mueller, and Deputy Attorney General Andrew McCabe, all of whom wisely sent surrogates to represent them at CFIUS. All members present must have approved Hillary’s URANIUM ONE deal, because opposition by any member would have killed it.

Moreover, Robert Mueller, Andrew McCabe and Rod Rosenstein were later involved in investigating Uranium One, but the details of their investigation were never revealed to the CFIUS committee, nor were any indictments of foreign entities made public if there were any. All participants must have recognized their legal vulnerabilities once Donald Trump was elected President.

#3 “OBSTRUCTION”: The case for “Obstruction of Justice” made against President Trump by Special Counsel Mueller has often been described as a “blueprint for Impeachment” and is evidence that Mueller and his team had devious and partisan motives from the start.

As FBI Director, Robert Mueller was a non-voting member of CFIUs, but he did have a veto over any such agreement: Hence, Mueller tacitly approved Hillary Clinton’s Uranium One deal. He should also have recused himself from his appointment as Special Counsel, because he had been rejected by President Trump as FBI Director just prior to his appointment.

Mueller then revealed his animus toward President Trump by selecting a team of investigators that consisted exclusively of highly partisan and “angry Democrats” – to borrow President Trump’s expression — many of whom gave money to Hillary Clinton’s 2016 presidential campaign. Apparently, each time President Trump criticized the Mueller “witch- hunt,” the Mueller team considered that an act of “obstruction.”

In the opinion of the Mueller team, Trump had no First Amendment rights, no authority to fire appointees within the Executive Branch, and no right to fight back against what he knew to be the false charges of “Russian Collusion” made against him. These are absurd claims, and none could withstand judicial scrutiny since neither the President nor anyone else loses their First Amendment free speech rights just because they have been elected to public office.

Trump never claimed Executive Privilege, he surrendered all 1.4 million documents subpoenaed by Mueller, and his campaign and White House staff voluntarily submitted to 500 interviews over the course of two years. The idea that Trump or his staff “obstructed” anything is simply a falsehood perpetuated by pathological liars among the Pharisees of the Jews’ Media and their co-conspirators in public office.

If Trump’s criticisms of the Mueller Investigation can legitimately be considered “obstruction,” then the many Congressional critics of Attorney General William Barr’s current investigation into rogue Justice Department employees and FBI agents should also be equally clear examples of Obstruction of Justice.

#4 UNIQUENESS OF TRUMP: Anyone with the surname “Bush” or “Romney” or “McCain” would have caved and resigned immediately after the appointment of a Special Counsel and would have done so without a fight. That’s the way RINO Republicans have always conducted themselves and their presidencies, and why the New Communist Party does not seem to understand why it is that President Trump won’t play the game and act like other Republicans, and has persisted in fighting back against his enemies.