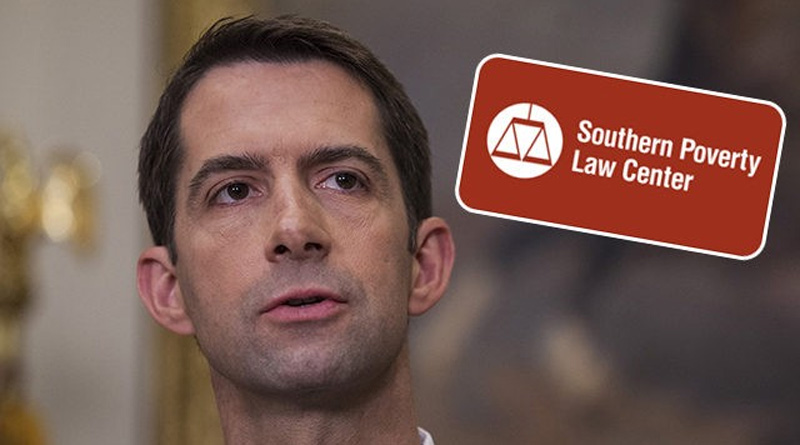 Sen. Tom Cotton (R-AR) is pressing the IRS to investigate the tax-exempt status of leftist group Southern Poverty Law Center (SPLC), an organization that has been mired in scandal.

Cotton argues that a series of recent reports regarding the leftist group’s patently political activities are troubling, and in a letter to the head of the IRS provided to Breitbart News exclusively ahead of its public release questions whether these actions warrant removal of the group’s status as a nonprofit organization.

“I am writing to urge you to investigate whether the Southern Poverty Law Center (SPLC) should retain its classification as a 501(c)(3) nonprofit organization,” Cotton wrote in the Tuesday letter to IRS Commissioner Charles Rettig. “Recent news reports have confirmed the long-established fact that the SPLC regularly engages in defamation of its political opponents. In fact, the SPLC’s defining characteristic is to fundraise off of defamation.”

Cotton noted in the letter to the IRS commissioner, citing SPLC financial documents, that the leftist organization has made lots of money by targeting conservative groups with allegations that they are hate groups–regardless of the veracity of such allegations.

“This business model has paid well. The SPLC has accrued more than $500 million in assets,” Cotton wrote. “According to the group’s most recent financial statement, it holds $121 million offshore in non-U.S. equity funds. The SPLC uses these assets to pay its executives lavish salaries far higher than the comparable household average.”

Cotton’s letter cites a number of recent investigative reports by the media into SPLC’s standards and culture, including a recently-published CNN exposé where staff alleged racism and sexism running rampant throughout the leftist group’s organizational structure.

“Some employees at the Southern Poverty Law Center say the legendary civil rights nonprofit group suffers from a ‘systemic culture of racism and sexism within its workplace,’” Valencia and Kirkland wrote. “The SPLC, which has been on the front line of the fight against racial inequality and injustice in the United States since 1971, has been thrust into chaos after allegations over its treatment of minority and female employees. The claims have been followed by changes in its leadership and a company-wide review.”

Cotton also cites a New York Times report from Alan Blinder published on March 22 that Cotton noted described the SPLC as “in turmoil” while citing SPLC employee claims that the organization and its leadership are “complicit in decades of racial discrimination, gender discrimination, and sexual harassment and/or assault.” Both Richard Cohen, the organization’s president, and Morris Dees, the organization’s co-founder, have been pushed out in recent days amid these scandals — and the SPLC has named an interim president to lead the group for now.

“Based on these reports, and in the interest of protecting taxpayer dollars from a racist and sexist slush fund devoted to defamation, I believe that the SPLC’s conduct warrants a serious and thorough investigation,” Cotton wrote to the IRS commissioner. “Engaging in systematic defamation is not a tax-exempt purpose: Federal law requires nonprofits classified as 501(c)(3) organizations to comply with IRS guidelines and have a ‘tax-exempt purpose.’ While IRS guidance lists several examples of tax-exempt purposes, engaging in defamation as a business model is of course not one of them. The SPLC defames other organizations in several ways.”

From there, Cotton cites a Washington Post piece by David Montgomery published in November 2018. The piece in the Post notes how the SPLC, which used to simply target hate groups like the KKK, Neo-Nazis, Black Nationalists, White Nationalists, and others, has expanded in recent years its so-called “hate map” to target mainstream conservative organizations to tarnish their reputations in order to push a leftist agenda.

“Today the SPLC’s list of 953 ‘Active Hate Groups’ is an elaborate taxonomy of ill will,” Montgomery wrote in the Post on Nov. 8, 2018. “There are many of the usual suspects: Ku Klux Klan (72 groups), Neo-Nazi (121), White Nationalist (100), Racist Skinhead (71), Christian Identity (20), Neo-Confederate (31), Black Nationalist (233) and Holocaust Denial (10). There are also more exotic strains familiar only to connoisseurs: Neo-Volkisch (28; ‘spirituality premised on the survival of white Europeans’) and Radical Traditional Catholicism (11; groups that allegedly ‘routinely pillory Jews as ‘the perpetual enemy of Christ’ ‘). Then there are the more controversial additions of the last decade-and-a-half or so: Anti-LGBT (51), Anti-Muslim (113), Anti-Immigrant (22), Hate Music (15), Male Supremacy (2). Finally, the tally is rounded out by a general category called Other (53) — ‘a hodge-podge of hate doctrines.’”

Montgomery noted that the SPLC hate group list for many years — decades, he says — “was a golden seal of disapproval, considered nonpartisan enough to be heeded by government agencies, police departments, corporations, and journalists.”

“But in recent years, as the list has swept up an increasing number of conservative activists — mostly in the anti-LGBT, anti-immigrant and anti-Muslim categories — those conservatives have been fighting back,” Montgomery wrote. “[General Jerry] Boykin, of the FRC, recently sent a letter to about 100 media outlets (including The Washington Post) and corporate donors on behalf of four dozen groups and individuals “who have been targeted, defamed, or otherwise harmed” by the SPLC, warning that the hate list is no longer to be trusted. Mathew Staver, chairman of the Christian legal advocacy group Liberty Counsel, told me 60 organizations are interested in suing the SPLC.”

Conservatives’ efforts to expose the SPLC as a fraudulent group that does not represent an honest arbiter of what is a hate group and what is not have been effective, Montgomery noted.

“There are signs the campaign is having an impact,” Montgomery wrote. “Last year GuideStar, a widely consulted directory of charitable organizations, flagged 46 charities that were listed by the SPLC as hate groups. Within months, under pressure from critics, GuideStar announced it was removing the flags. The FBI has worked with the SPLC in the past on outreach programs, but Attorney General Jeff Sessions has signaled a very different attitude. At a meeting of the Alliance Defending Freedom in August, Sessions said, ‘You are not a hate group,’ and condemned the SPLC for using the label ‘to bully and to intimidate groups like yours which fight for religious freedom.’”

In his letter to the IRS leader, Sen. Cotton noted that the SPLC regularly defamed reputable conservative groups in its hate map designation–which runs as he already detailed contrary to IRS regulations and federal statute regarding nonprofit status for organizations.

“Each year, the SPLC publishes a so-called ‘hate map,’ which ostensibly identifies hate groups such as the Ku Klux Klan and the Nation of Islam. But under the guise of its ‘hate map,’ the SPLC also lists its mainstream political opponents and faith-based groups, including reputable organizations such as the Family Research Council, the Alliance Defending Freedom, and the Center for Immigration Studies,” Cotton wrote.

Cotton also noted that the SPLC has regularly engaged in defamation of individuals, citing reports from the Washington Examiner‘s Emily Jashinsky and National Review‘s Douglas Murray.

Cotton noted too that the leftist group’s defamation of conservatives has real-life serious consequences as well, citing the shooter who attacked the Family Research Council in 2012.

“The SPLC’s defamation has not just damaged the reputation of these mainstream organizations and individuals by lumping them in with the Ku Klux Klan and Nation of Islam; it has resulted in injury and the threat of the loss of life, including an attempted mass murder,” Cotton wrote. “In 2012, Floyd Lee Corkins entered and shot up the Family Research Council’s headquarters, while carrying fifteen Chick-fil-A sandwiches that he planned to smear in his victims’ faces. Corkins told investigators that he selected the Family Research Council because the SPLC labeled the organization as a ‘hate group.’”

Cotton cites a 2013 CNN report on Corkins’ trial, where Corkins admitted he targeted the FRC–a leading mainstream conservative group–because of SPLC’s false labeling of it as a “hate group.”

Cotton then turns to how the organization has abused its tax-exempt status to enrich its leadership, including the now-removed leader Dees. To make these points, Cotton cites a New Yorker investigation into Dees and the SPLC published on March 21, as well as the SPLC’s own financial documents including the group’s 990 form filed with the IRS and a report from the Nonprofit Times.

“The SPLC operates as a tax-sheltered slush fund to enrich its leadership: In addition to failing to have a tax-exempt purpose, the SPLC’s peculiar financial situation warrants your attention,” Cotton wrote. “Federal law prohibits tax-exempt organizations from inuring to the benefit of any private individual. Yet the SPLC has accrued more than $500 million in assets as of October 31, 2018. Reportedly and inexplicably, $121 million of these assets are parked in offshore accounts. In 2017 alone, these funds were used to pay the organization’s founder and longtime leader, who was recently removed for unspecified inappropriate conduct, more than $400,000. This payment came despite reports that Morris Dees, in addition to allegedly engaging in sexual misconduct, had ‘ratchetted down his involvement with the organization.’ This is more than nine times the median household income for Montgomery, Alabama, where the SPLC is headquartered.”

“Perhaps the SPLC was founded for noble purposes and decades ago performed some good work, but what is left of the SPLC is no longer operating in a manner consistent with IRS guidelines and applicable law,” Cotton wrote. “Based on this concerning information and the flood of recent reports, I encourage you to take immediate action.”