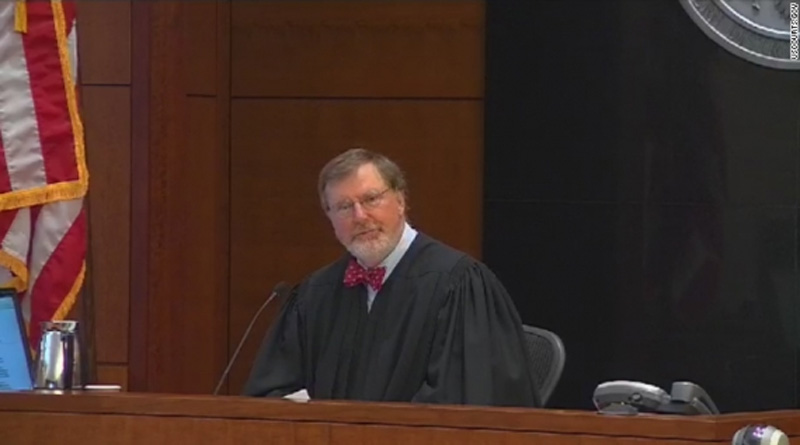 The White House issued a statement vowing to file for an emergency stay of a federal judge’s order to block President Donald Trump’s executive order restricting immigration and refugees from high risk countries from the Middle East.

“At the earliest possible time, the Department of Justice intends to file an emergency stay of this order and defend the executive order of the President, which we believe is lawful and appropriate,” read a statement from Sean Spicer to reporters.

The statement explained that Trump’s order was issued under his constitutional authority to protect the American people.

U.S. District Court Judge James Robart took the unusual step of issuing a emergency stay of Trump’s order as the attorneys general of Washington and Minnesota filed a lawsuit to overturn the legislation.

The plaintiffs argue that Trump’s order violates the U.S. Constitution and federal law, including what they say is discrimination against a particular religion.

But Trump defied the order, sending a message on Twitter on Saturday.

“The opinion of this so-called judge, which essentially takes law-enforcement away from our country, is ridiculous and will be overturned!” he wrote.

While the White House continues its legal fight at the Appellate Level, members of Congress have begun taking a very hard look at District Judge Robart, for what may be “impeachable bad behavior.”

Robart is a US District Court Judge. DISTRICT Court. His jurisdiction rests solely in portions of Washington State. Yet the Judge declared that his restraining order “applies nationwide.” He does not have judicial authority “nationwide.”

Robart granted “legal standing” to two states which filed the legal case. In order to have legal standing, a person or corporation must be personally/directly affected. Neither Washington State nor Minnesota, two Plaintiffs in the case, can show that either “state” was affected at all. Perhaps citizens WITHIN each state may have been affected, but not “the states” themselves. So Robarts agreeing that the states have “legal standing” seems odious on its face.

Next, Robart decided the plaintiffs “are likely to succeed” in their lawsuit. This is so totally specious as to defy belief.

“The Immigration and Nationality Act (INA) provides that individual aliens outside the United States are “inadmissible”—or barred from admission to the country—on health, criminal, security, and other grounds set forth in the INA.

However, the INA also grants the Executive several broader authorities that could be used to exclude certain individual aliens or classes of aliens for reasons that are not specifically prescribed in the INA. Section 212(f) of the INA is arguably the broadest and best known of these authorities. It provides, in relevant part,:

Over the years, Presidents have relied upon Section 212(f) to suspend or otherwise restrict the entry of individual aliens and classes of aliens, often (although not always) in conjunction with the imposition of financial sanctions upon these aliens. Among those so excluded have been aliens whose actions “threaten the peace, security, or stability of Libya”; officials of the North Korean government; and aliens responsible for “serious human rights violations.”

Neither the text of Section 212(f) nor the case law to date suggests any firm legal limits upon the President’s exercise of his authority to exclude aliens under this provision.

The central statutory constraint imposed on Section 212(f)’s exclusionary power is that the President must have found that the entry of any alien or class of aliens would be “detrimental to the interests of the United States.” The statute does not address (1) what factors should be considered in determining whether aliens’ entry is “detrimental” to U.S. interests; (2) when and how proclamations suspending or restricting entry should be issued; (3) what factors are to be considered in determining whether particular restrictions are “appropriate”; or (4) how long any restrictions should last.

The limited case law addressing exercises of presidential authority under Section 212(f) also supports the view that this provision confers broad authority to bar or impose conditions upon the entry of aliens. Key among these cases is the Supreme Court’s 1993 decision in “Sale v. Haitian Centers Council, Inc.”, which held that the U.S. practice of interdicting persons fleeing Haiti outside U.S. territorial waters and returning them to their home country without allowing them to raise claims for asylum or withholding of removal did not violate the INA or the United Nations Convention Relating to the Status of Refugees.

The U.S. practice had been established by Executive Order 12807, which was issued, in part, under the authority of Section 212(f) and “suspend[ed] the entry of aliens coming by sea to the United States without necessary documentation.”

However, depending on their scope, future executive actions under Section 212(f) could potentially be seen to raise legal issues that have not been prompted by the Executive’s prior exercises of this authority.

Section 215(a)(1) similarly provides that “it shall be unlawful for any alien” to enter or depart the United States “except under such reasonable rules, regulations, and orders, and subject to such limitations and exceptions as the President may prescribe.” For example, President Carter cited Section 215(a)— rather than Section 212(f)—when authorizing the revocation of immigrant and nonimmigrant visas issued to Iranian citizens during the Iran Hostage Crisis.

Thus, US District Court Judge Robart seems to have usurped Presidential Power, made a ruling beyond his jurisdiction and granted legal standing to parties who don’t have any standing. This is what members of Congress are now reviewing to determine if Impeachment of the Judge is prudent.