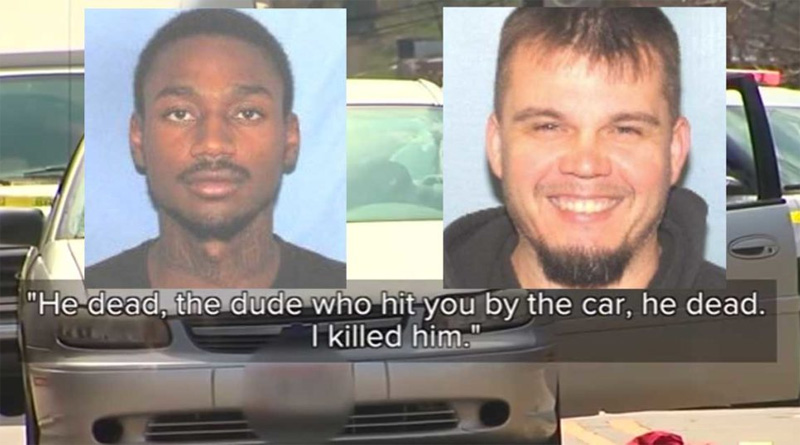 This lynching is very similar to the one committed against Steve Utash, then 54, in Detroit in 2014. An unsupervised black child runs into traffic, causing an accident, in which he is hurt. The white driver stops his vehicle, and is attacked by four racist thugs. The four have been ordered to stand trial on charges of assault with intent to murder in the severe beating of a motorist who accidentally struck a 10-year-old Detroit boy with his pickup truck.

Racist black thugs have a history of dragging white drivers out of their vehicles, and beating them within an inch of their lives, even when no unsupervised black child has caused an accident.

Thus, any compassion a white driver shows (or any other white dealing with blacks in a black area) towards blacks is turned by them into a weapon against him. The moral of the story is, if you are white, you must train yourself to not show compassion towards blacks in black-dominated areas, but instead treat them as your mortal enemies.

Police are seeking two suspects in the March 24 Walnut Hills shooting of a Mason man whose vehicle had just struck a 4-year-old. “They just blazed him,” a person tells a dispatcher in 911 calls made public Friday afternoon.

According to court documents, Jamall Killings, 25, of Walnut Hills is wanted for felonious assault and murder. A sworn affidavit from a Cincinnati police officer says Killings caused the death of James Urton, 44, of Mason “by means of a firearm.”

Also sought as a suspect in the shooting is Deonte Baber, 25.

The first 30 seconds of one call are apparently the sound of the child who was struck, crying in the background. No one, not the caller nor any of the speakers, addresses the dispatcher.

Warning: the description below of the murder of Jamie Urton is very graphic and brutal, but so is life in multiracial America. As disturbing as what happened may be, the fact that this kind of black-on-White racial hate crime isn’t an isolated incident and has happened before is even more disturbing. Most disturbing of all is that Whites have not yet begun to fight back in the ongoing race war which is literally killing them.
CINCINNATI —The father of a 4-year-old child who was struck by a car has been charged in connection with the driver’s death.

“Somewhere in the middle of that assault he was shot, and he expired because of that shooting,” said Cincinnati Fraternal Order of Police President Dan Hils.

The child was treated at a hospital and released.

Baber and Killings are still at large.

A 911 call reveals just how upset the father of the 4-year-old got after his son was hit by a car on Kenton Street.

A witness to Urton’s killing said the unarmed victim was begging for mercy as the gunman shot him over and over, even after his body fell limp.

“He didn’t mean to do it. He was bawling his eyes out, saying he was sorry, begging for mercy, basically, and they shot him,” said the witness, who we are not identifying.

“The guy was reaching in the window beating him up in the window and then eventually the door of the car came open and I heard five gunshots,” the witness added.

Several witnesses called 911 and described the violent killing in detail.

“After his arms just dropped and there was no life in him anymore, they shot him again,” the witness said.

Urton worked for the Cincinnati Association for the Blind. He was taken to the University of Cincinnati Medical Center, where he died

The Associated Press and KSN Misrepresent Lynching as “Fight”; Did Emmitt Till Die in a “Fight”?

The Definitions of lynching:
1. Putting a person to death by mob action without due process of law.
2. Lynching is an extrajudicial punishment by an informal group. It is most often used to characterise informal public executions by a mob in order to punish an alleged transgressor, or to intimidate a group.

About Nicholas Stix: …a dissident journalist, whose work has been published in dozens of daily newspapers, magazines, and journals in English, German, and Swedish, under my own name and many pseudonyms. While living in internal exile in New York, where I am whitelisted, I maintain NSU/The Wyatt Earp Journalism Bureau and some eight other blogs (some are distinctive but occasional venues, while others are mirrors), and also write for stout-hearted men such as Peter Brimelow and Jared Taylor. Please hit the “Donate” button on your way out. Thanks, in advance. Follow my tweets at @NicholasStix.

3 thoughts on “A Lynching in Cincinnati: Jamie Urton, 44, Murdered for “Driving While White””